Some creative work currently on my mind … | Iain Biggs

There are a lot of worthwhile ongoing projects that people are pursuing out there. For me these include work by:

Reiko Goto and Tim Collins, environmental artists who have been working together since 1985. They are currently taking the Black Wood of Rannoch, the most significant Caledonian pinewood in the southern highlands, as the focal point for a creative inquiry. Working from within the tradition of environmental art research, they are working to contribute ideas to our understanding of cultural ecology and the value of native forests by developing: “artworks and narratives that reflect the experience and understanding of the visual/sensual and the social/cultural aspects of an ancient semi-natural forest. What has emerged during a deep reading of that place and its history is an understanding that historic land use and political conflict have shaped an ancient forest, resulting in an ecologically robust yet semi-natural current condition. However the cultural content and public interest one would expect to find in relationship to a historically important remnant native forest of Scotland is largely missing. The recovery of that content and interest was the focus of this research. This work contributes to ongoing discussions abut cultural ecology and cultural ecosystems services and their assessment”.

Having started my working life teaching painting, I don’t see the hardline division between ‘traditional’ and ‘new’ art forms on which so many critics, curators and art historians have built careers.  So I still have a very real interest in certain ways in which the tradition of painting continues to be adapted so as to meet the needs of understanding our contemporary world. One such adaptor is Samira Abassy, who has been producing highly original and telling work for many years, including her recent series CONFLICTING NARRATIVES: SERIES OF ETERNAL WAR. She will have an exhibition entitled LOVE & AMMUNITION at the Rossi & Rossi gallery in London from June 4th – July 10th.

Over the past few months I’ve been having regular conversations with Luci Gorell Barns. Luci writes, and makes paintings, books, maps, and animations that revolve around ideas of connection and belonging. She often collaborates,  seeing her work as located in a community of practice that extends across disciplines. A fascinating current collaboration with her sisters – called THE STINGING NETTLE GANG – is both typical of her work and an interesting counter-point to the work she does ‘alongside others’ – for example CARTOGRAPHERS OF COMPASSION: COMMUNITY MAPPING OF HUMAN KINDNESS.

At present I’m acting as an initiator/consultant on a project being developed with an old family  friend – Sandy Schott – who recently moved to Simonsbath (located pretty much in the heart of the Exmoor National Park) – and two young artists Miriam Mallalieu and Liam McLaughlin. I first met Miriam and Liam when they were studied with Mary Modeen at Duncan of Jordanstone College of Art & Design and we reconnected when they moved south recently. I’ll report back on this as it develops

Other highly creative people I’m been in dialogue with and whose work I’ve been talking about in recent presentations at conferences include the farmer and performer Ffion Jone (based in mid-Wales); the environmental artist Jethro Brice (who is about to start a PhD with Bristol University); the West of Ireland artist Deirdre O’Mahony (who has recently started a new SPUD residency at The Workhouse Union, Callan County Kilkenny; the ethno-musicologist, folk singer,maker Lucy Wright (based in Manchester), who is also a member of the Nest Collective; and the Sarah Rhys, who is currently artist in residence at the Joseph Herman Art Foundation, Cymru (see below). 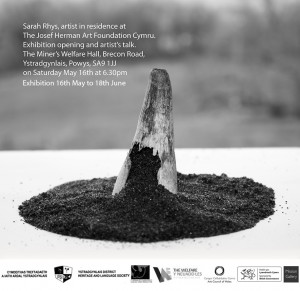 I have discussed Deirdre’s work, and some of the concerns that I would see as linking all the people I’ve mentioned here, in an article to be published shortly by the Canadian Journal of Irish Studies.