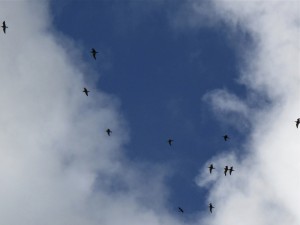 I’ve just finished reading Helen Macdonald’s H is for Hawk and can’t help but wonder why I feel vaguely irritated by it. After all, much of what the reviews say about it is clearly true, and I can entirely see why it won a prize for non-fiction, since the writing is enviably good and the topic – her getting over her beloved father’s death by training a Goshawk – beyond reproach. So what’s my problem?

It’s less a problem, perhaps, than a matter of contingency and orientation – although I think both may have a wider resonance or I won’t be writing this here.

Some of the ‘lessons’ about wildness in the book are insights I have been fortunate to have rubbed up against from reading James Hillman’s writing over many years ago. That’s the contingency bit – I just happen to have spent years reading material that’s taken my view of the world to other places, an experience that for me personally gives this book a slightly old-fashioned feel. And perhaps this is amplified by the confessional self-absorption with a goshawk at the heart of the text, no matter that the author is only too well-aware of this. To call it a de-centred ode to possessive individualism dressed up as a meditation on nature and nature writing about hawks – almost half the book is a rumination on T H White, focused around his book The Goshawk – would be inaccurate, unjust, and a gross over-statement of what I’m groping for. But, none the less, there is something about the book that brings that thought to mind.

The real issue, however, is one of what I can only call orientation.

This book is, I am told on the flyleaf, by ‘a writer, poet, illustrator, historian, and affiliate at the Department of History and Philosophy at the University of Cambridge’. And, for all the ups and downs of the author’s personal life detailed in the book, that’s what it reads like. Helen Macdonald may distance herself from the traditional elite for whom hawking was a sign of belonging, but her book is saturated with her emersion in an elite world of another kind. I do not mean that as a judgement or criticism – it would be hypocritical if I did – simply as an observation as to why I find the whole story slightly hollow in its distance from the shared and mundane troubles and joys of ordinary lives and lifeworlds. A distance the author may be acknowledging when she writes of not having spoken to the working people for whom the landscape over which she hawks is an everyday taskscape.

‘Comparisons are odious’, we’re told, and maybe that’s true. But making careful discriminations between different orientations is, I hope, something else.

Two day before my sixty-fifth birthday my wife Natalie and I went to hear Kathleen Jamie not giving a lecture that was supposed to be on Poetry, the Land, and Nature. She had refused point blank to lecture, she told us. Instead she read some of her poems and prose for about twenty minutes and then very reticently answered questions, first from the Chair and then from the audience. Her reticence could easily have been profoundly irritating. Long leading questions designed to draw her out on fashionable ‘environmental’ and literary topics were briefly answered, politely punctured, or else deflected, all in a short sentence or two. But instead of irritating the audience her whole way of being with us in that wholly unnatural situation was a heartwarming, at times moving, demonstration of a poet insisting on putting her work first; of refusing to play the ‘literary celebrity’ game the Chair clearly believed we had come for.

Many things stay with me from that evening. The importance she attaches to attention in the everyday. The contrast between her innate reticence and her animation when speaking about the change in Scotland’s collective psyche in the run up to the referendum and her response to that as a poet. But what comes to mind now, in musing on H is for Hawk, is something she said in answer to a question about the insufficiency of the term ‘Nature’, its implicit division of life into contrary, antagonistic, categories.

“Looking up from dealing with the socks and you hear an oystercatcher – why should these things be separate?”

In the context of all she’d said earlier, those socks were resonant of the mundanity of domestic life and its inevitable restrictions – she’d spoken about how the care of her young children had kept her from travelling far, for example. Of course Kathleen Jamie is a highly regarded poet and non-fiction writer, a Professor of Poetry at Sterling University, and a Fellow of the Royal Society of Literature in addition to her domestic roles. But in everything she said that evening there was a sense of a woman and a poet who is attentive to, and at home in, the mundane yet potentially wondrous place she happens to find herself inhabiting at any given moment – a place she evoked for us by recalling catching herself balanced between the necessary act of washing socks and the visceral thrill of unexpectedly hearing a distant oystercatcher’s cry through a half-open window.

And, for me personally, that is quite another, closer, deeper, sometimes wilder, darker, yet more resonant, place than anything in the lifeworld H is for Hawk so masterfully conjures into being.