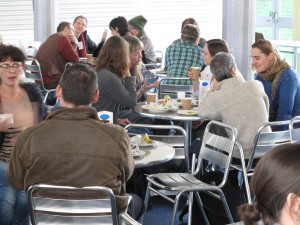 As my last post indicates, Hedge Schools are on my mind.

I saw my friend Mel Shearsmith yesterday. Mel used to be the hinge on which much of the everyday business of PLaCE as a research centre at UWE, Bristol, turned. Then she started a PhD at another university, was poorly supervised and became disillusioned with the whole academic business. She is now busy starting a new life as a craftswoman.

We spoke about PLaCE and she reminded me of this idea that never goes quite away (as I’ve indicated, it surfaced at the Thin Place event in Wales recently). What is needed now is a genuinely interdisciplinary alternative to the disciplinary university system, a monopoly system so deeply bound into the status quo as to be a serious hindrance to the development of the alternative thinking we now so badly need. (I am not speaking of individual academics, many of who are doing all that they can to continue to provide a genuine and relevant education, but rather to the managerial culture of audit and intimidation, and of course to the politics that allow this to be promoted as ‘necessary’).

I was reminded of this again this morning, speaking with someone who told me how impressed he had been reading the Green Party’s policy manifesto; how it had struck as being genuinely radical. But where are the radical educational initiatives that will help argue for that kind of thinking, support the academics and students who want to change the system of higher education so that it is something other than ultimately just another arm of a vicious and archaic status quo?

In this context my thinking has constantly turned to the old Irish practice of Hedge Schools, the clandestine rural schools set up for poor Catholic children when punitive laws forbad Catholics from setting up schools or from sending their children abroad to school. It seems to me that we need to reconsider this idea – indeed many of the workshops and seminars run by PLaCE and the other networks associated with it have had something of the Hedge School spirit about them.

As I explained to Mel, I can do nothing to push this notion forward until my current family concerns are resolved but, when that is the case, I hope to pick this notion up again as a way of mediating between those academics with a genuine alternative vision and all those hungry for a genuine inter-disciplinary site for exchange and learning based on thematic relevance, rather that the ‘colonialist’ realpolitik of ‘inter-disciplinarity’ in a deeply entrenched disciplinary system strung out on (or more charitably by) a politically-driven audit culture, a punitive student loan system, and a politics predicated on every-shrinking budgets designed to ensure that only a wealthy elite can thrive.

At some point in the not-too-distant future I hope to help convene what might be called a ‘hedge school summit’ with a view to moving this notion into the realm of the practical.