Disciplinarity and the political culture of exclusory thinking | Iain Biggs 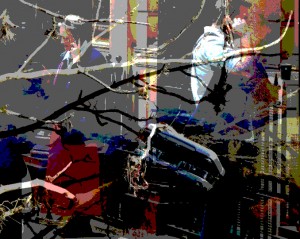 Recently I attended an advisory meeting at the Royal West of England Academy. One item on the agenda in particular reminded me forcibly just how different my own ‘hybrid’ perspective is to that of the other RWAs who were gathered in that room. They are what we might call, for want of a better phrase, people who ‘profess’ to be artists in a sense I have not for many years – people whose identity is bound up closely with the notion of ‘being an artist’ and who are embedded in a world where a certain kind of networking is intrinsic; where sales, patronage, useful gallery connections, the power to influence opinion about other artists’ work, is the common currency. In such company I am something of a pauper, marginal; really an academic, no matter that I am also an RWA or that I too make and exhibit work. Put bluntly, we occupy different lifeworlds. I should add that this observation is in no sense a complaint or criticism. It evokes the simple fact of my multiplicity, something that I am happy to acknowledge.

Equally when I find myself at an event dominated by orthodox academics – particularly those in the Humanities – I experience something of the same sense of mild estrangement, of being on the outer margins of a particular and other professional world. One consequence of this is that when I write about the negative aspects of disciplinarity I often wonder whether I am overstating the case. Am I simply conflating the pedagogic emphasis on discipline-based education – on which our society’s concept of professionalism depends – with a very real and often deeply vicious realpolitik that thrives on disciplinary exclusivity because it suits me personally to do so? Or are there real and deep-seated structural connections between these two? And if the second is the case, what are those connections?

I think I have already answered this last question in an earlier post –Troubling ‘epistemological/methodological’ waters? (part two) – but I’ll paraphrase it again here. (The texts quoted are referenced there).

It has been persuasively argued that orthodox evaluations of research in the Arts and Humanities bear “no relation to how innovation and creativity occur” (Leach & Watson 2010: 7). Leach and Watson argue that the real value of such research is that it is: “carried by and in persons” as “expertise, as confidence, as understanding and orientation to issues, problems, concerns and opportunities, as tools and abilities” that reside in a “notion of responsiveness” (ibid: 7) and support and authorize those qualities in others. This understanding calls for a privileging of responsive listening over authoritative speaking so that this process is best understood as the conversational “aspect of citizenship”, one that privileges those “spaces and opportunities for discussion, argument, critique, reflection’ in which “collaboration” becomes a basis “for evaluation” (ibid: 3).

The importance of responsive listening is increasingly being argued by certain artists and ecologists (see, for example, Perdita Phillips: ‘Sounding and Thinking Like an Ecosystem’ in Antennae: The Journal of Nature in Visual Culture , Vol. 27, 2013, p. 114-128), and has been argued philosophically by Gemma Corradi Fiumara in her The Other Side of Language: A Philosophy of Listening (1990). In the context of the link between disciplinary education and the realpolitik of exclusory thinking I would stress her insights into the academic habits embedded in: “the mechanism of ‘saying without listening’”, seen as having finally constituted itself as “a generalized form of domination and control” (1990:2). She addresses this situation in terms borrowed from Lakoff and Johnson, highlighting the nature of the metaphorical power embedded in language – in, for example, our concern to ‘win’ arguments as if they were wars (ibid: 108). I have taken this to square with Owain Jones’ insistence that we need to replace “established adversarial styles of academic argument with ‘a model of dialogical encounter’”, one based on the assumption that “the other has something to say to us and to contribute to our understanding” (Jones 2008: 1607). Here ‘the other’ is anything from someone who does not share our professional or disciplinary ‘world’ to an animal or ecosystem. This seems to me to shift the emphasis away from disciplinary-based authority that is predicated on exclusive knowledge towards what the philosopher Paul Ricoeur calls ‘critical solicitude’. It is of course just this ‘critical solicitude’ that is lacking in many so-called ‘inter-disciplinary’ projects, where the parameters within which any exchange can take place have been pre-set by a dense weave of institutional presuppositions, all of which now ultimately relate to an economics designed to reinforce existing hierarchies and values. Research as ‘more of the same’, more or less. And all too often played out as just another example of careerism thinly disguised as ‘knowledge production’. It might seem that this is a matter of merely academic interest, until you see how it can play out in individual lives.

The real impact of the exclusory thinking disciplinarity breeds in a culture dominated by possessive individualism becomes apparent when you are privy to the horrors of medical and psychiatric abuse of vulnerable individuals by ‘health professionals’ and the manipulative realpolitik of associated researchers – all of them blind to the need for common human empathy by a professional arrogance and greed for power (and its financial rewards) underwritten by the authority derived from disciplinary exclusivity. (For those interested in the reality that lies behind this observation, see http://voicesfromtheshadowsfilm.co.uk).

The power politics that lie behind this blindness become visible in the extraordinary distortions and manipulations perpetuated by an organisation called the Science Media Centre (SMC) in London. In 2003 George Monbiot published an article on the group behind this entitled: Invasion of the Entryists, revealing the personal connections of a group that has “permeated a scientific establishment, always politically naïve”, and in consequence has “unwittingly…permitted its interests to be represented to the public by the members of a bizarre and cultish political network” (see http://www.monbiot.com/2003/12/09/invasion-of-the-entryists/). More recently Mićo Tatalović has reported on the same group (see http://www.scidev.net/global/journalism/feature/uk-s-science-media-centre-lambasted-for-pushing-corporate-science.html) and the supposedly impartial organisation it runs, pointing out that it has an agenda dominated by topics close to corporate, rather than public, interest and is heavily reliant on lobbyists, to the point where Connie St Louis, former president of the Association of British Science Writers and a senior lecturer at City University, London, states that she would close it down. Professor David Miller, a sociologist at the University of Bath, UK, makes it clear why St Louise would wish to do so.

Miller’s analysis of the workings of the Centre showed that: “some 20 of the 100 most quoted experts were not scientists, as defined by having a PhD and working at a research institution or a top learned society. Instead they were lobbyists for and CEOs of industry groups”, in particular those who favour the positions of the bioindustry and particular corporate sectors, and that it’s coverage reflects “the priorities of their funders”. This has direct political implications. Tatalović also references a paper in Journalism Studies by Andy Williams of Cardiff University on media representation of animal-human hybrid embryos in the United Kingdom between 2006 and 2008. This shows that a proposal that such research be banned “was opposed by what he called ‘a powerful coalition of scientific organisations’ coordinated by the SMC” and that a lobbying coalition was allowed to use the SMC’s media briefings to dominate media reports and so get the proposed ban dropped.

It is in instances like this that we see the price paid for a disciplinary exclusivity predicated on the authority to speak on behalf of others without any sense of obligation to listen responsively, an authority underwritten by a discipline-based education system with its “established adversarial styles of academic argument”, rather than on a multi-disciplinary exchange based on ‘a model of dialogical encounter’”(Jones 2008: 1607). Of course disciplinarily in itself does not exclude that encounter, but the academic and media realpolitik currently in place ensures that all the cards are stacked against this happening.