Daylighting – the redirection of a stream into an above-ground channel (e.g. in urban design and urban planning). Typically, the goal is to restore a stream of water to a more natural state. More generally, the ‘making visible’ of what was formally evident but has subsequently been hidden below ground.

Polyverse – a term used by Roger Corless to argue for our existence as a confluence of many selves living simultaneously in and between multiple realities or lifeworlds. This position is taken as other to that of the monolithic ‘life-as’ promoted by rationalist discourse that derives its authority from a secular, scientistic version of the Monotheistic theologies found in the Religions of the Book (Judaism, Christianity, & Islam).

I’ve just come back from three days of meetings, walks, exchange, etc. led by the Cymerau team – Sara Penrhyn Jones, Dr Alexandra Plows, and Dr Tom Payne, along with Shelagh Hourahane, Hywel Griffiths and others – who are part of the larger AHRC-funded Towards Hydrocitizenship  research project. Our meetings took place in various local venues – a sports centre, the youth hostel, the Friendship pub, etc. – in Borth, which is in Ceredigion, mid-Wales. This three-day gathering was one in an ongoing series. On each occasion as many of the large national team as possible try to meet up. This allows us both to support each other by sharing ideas, concerns, and good practice and to do more formal work; to debate and think through issues, strategies, and directions for the project as a whole.

The Towards Hydrocitizenship project a whole is intended to extend “the more established notion of ‘ecological citizenship’ which sees transformations in how society works at individual and collective levels as essential if we are to generate more meaningful, ecologically sustainable forms of society”. The initiators of the project believe this ecological understanding is best put to work in the various contemporary contexts of both individual and community engagements with water, with the arts acting as a key ‘driver’ in social engagement. Unfortunately, and inevitably, the process by which such projects are funded means that the model of ‘combative collaboration’ fundamental to genuinely ‘inter’- , ‘trans’ -, or ‘extra’- disciplinary research activity can really only be considered and enacted post-hoc. This in turn means that fundamental issues of perspective and difference, instead of being on the table during the initial conception of the project, become the subject of attempted ‘daylighting’ during the project. This tends to cause a degree of friction and is rarely successful because of vested institutional and other interests.

As always, my personal experience of this gathering was inflected to some degree by my recent reading. Two books seem particularly relevant. One was George Lakoff’s The Political Mind and the other Barbara Hurd’s Stirring the Mud: On Swamps, Bogs, and Human Imagination. The first book became an (albeit very imperfect and problematic) lens through which many of the intra-personal reverberations bouncing around just below the surface in the meetings could be viewed. The second provided the perfect link between some of the issues raised in those same meetings and the richness of the physical and metaphorical environment of Cors Fochno, the very unusual raised peat bog located just inland from the village of Borth on the south side of the Dyfi estuary.

‘Daylighting’ the hidden – an approach to authority and power? 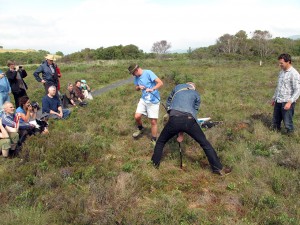 The meetings I attended served to both confirm some aspects of Lakoff’s argument and, simultaneously, to highlight the dangerously reductive and misleading nature of the book’s popularist, evangelical orientation. (It seems to be aimed exclusively at middle-brow American readers). It may serve Lakoff’s particular ends to characterise the power dynamic in (American) politics as tensioned between ‘the authoritarian father’ and the ‘nurturant parent’, but as a model for thinking about the lived realities of power that’s simply way too reductive an image.

Ten years ago some of the thinking I developed during my doctoral work was published as a chapter in a book on arts doctoral research – Thinking Through Art: art / philosophy / language – edited by Katy Macleod and Lin Holdridge. This chapter – Hybrid texts and academic authority: the wager in creative practice research – argued for a multi-perspectival psycho-social approach to thinking about the power dynamics of framing academic research. My aim was precisely to avoid the kind of reductive, binary thinking that Lakoff uses. I took as my historical starting-point Alex Seago’s invention to counter the influence of the Archetypal psychologist James Hillman on debates about art as research. (This was made at the behest of the management of the Royal College of Art in the early 1990s). Seago’s task had been very simple: resolve the tension between what he identified as ‘Apollonian’ and ‘Dionysian’ perspectives on art and design research by ‘integrating’ the second into the first. This integration could then support the normative, ‘Apollonian’, perspective being pitched to the Art and Design HE sector by the RCA’s then Director, Christopher (now Sir Christopher) Frayling. The successful ‘resolution’ / ‘integration’ of this tension (at least in Seago’s terms) rested I argued on ‘an intellectual sleight of hand’ (p. 191), at least when seen from the perspective of the positions he seeks to exclude. This slight of hand flows from the fact that the position Seago upholds – and which he presumes to be neutral – is itself archetypally determined and, as such, has its bias. This remains hidden because it is assumed to be the norm. It is, in short, framed by that highly particular balancing of ‘reasonableness’ or ‘common sense’ and insistence on ‘the necessity’ specific to the perspective of the Athene archetype.

My apparently rarefied and esoteric argument continues to be relevant because Lakoff’s ‘authoritarian father’ (archetypally figured as ‘Zeus’ in Greek mythology) is rarely directly evoked in our neo-liberal European context. (The obvious exception being fundamentalists of all persuasions). More usually a variant of this position is represented by the figure of the authoritarian father’s obedient and ‘motherless’ daughter, namely the Athene archetype. Adopting her figural perspective allows powerful institutions and those who identify with them to assume the particular form of repressive ‘care’ that’s neatly captured in the popular saying “mother knows best” . This ‘caring’ position is both instrumental and highly conceptual in its basic assumptions. It assumes the absolute authority of the ‘caring mother’ as validated by the assumption that power is always exercised for ‘the good of the child’. However, it represents an authority that never practically engages in the direct forms of emotional or physical care associated with the lived practices of parenting. (The figure of the cerebral Athene, born directly from her father’s thigh, is that of a true virgin ‘daughter of the father’, one who shuns any experience of the mess, complexity and, above all else, the ambiguities of parenting).

That Athene – rather than the authoritarian Zeus or his son Apollo (with his daylight, high altitude, intellectual brilliance and aesthetic) is the dominant archetypal figure in the imaginary of the academic institution – makes life difficult for those who wish to draw on other, unrelated, archetypal perspectives; those animated by, for example, the figures of Dionysus, Aphrodite and Hermes. (There used to be a powerful but discrete Hestian element within the academic imaginary but, typically given its particular archetypal characteristics, it was largely invisible and rarely acknowledged. It’s attributes of gathering together and hospitality are now largely disparaged). The major problem with the dominance of the Athenian perspective (and one clearly present in our meetings) is that, by tacitly assuming itself to be the authoritative norm, it “conceals a defence against other archetypal enactments which then must perforce be judged abnormal” (James Hillman 1980 On the Necessity of Abnormal Psychology: Ananke and Athene in Hillman (ed) Facing the Gods New York, Spring Publications Inc. p. 32).  So from this Athenean academic perspective much of what is important to many artists is always going to appear, whether tacitly or implicitly, as irrelevant (namely ‘impractical’), abnormal or a deviation. As such it is likely to be reduced to a caricature of the Dionysian in its shadow aspect. (The positive, strongly grounded, non-hierarchical sociability of the Dionysian archetype is profoundly threatening to the whole Zeus / Apollo / Athene configuration of authority, which is predicated on hierarchies of relationship and obedience).

So am I suggesting that the only solution to this situation is a rigorous ‘daylighting’, a constant ‘bringing up to the surface’ of different archetypal positions? For myself the answer has to be comparable with my own creative imperative, which is to keep moving. So the answer has to be: “sometimes yes and sometimes no”.

The term, and more importantly the practice, of ‘daylighting’ is of course itself redolent of the Apollonian archetype. As such it’s largely incompatible with Barbara Hurd’s swamp-derived observations concerning ‘us’ (that is an ‘us’ that acknowledges living in a polyverse). She suggests that we are always to some degree: “things in the margins … on the brink of becoming something else, or someone else ..” (p. 7). Living with swamps and bogs has taught her (she is a poet as well as a prose writer on the natural world) that: “The one essential quality of the imagination is that it moves” – and consequently in my terms here ‘polyversal’ – “in wide sweeps, in pinched steps, out to sea, down into the interior”. That alone should make us careful about any over-emphasis on Apollonian daylighting. Hurd goes on to write: “the imagination is polytheistic and polygamous; its ground spring is multiplicity, not singularity” – and so as such it  invites a loose weaving around differently oriented warps and wefts rather than inter-disciplinary integration. This is because “trying to press a single meaning on its imagery is like asking a river to hold still. It will squirm out of your interpretations, jump its banks, form new rivulets and bayous in its relentless churn toward the open ocean” (p. 36).

So it seems to me that we have to stay with the ebb and flow of different archetypal currents that rise out of the mud of our unconscious and then sink back into it, however uncomfortable that may sometimes be.

Perhaps to be a hydrocitizen is to acquire, among various other qualities, the patience and humility to learn to avoid identifying with any single archetypal position; to learn to be fluid, to be a citizen of a polyverse in flux and in flow that doesn’t mistake itself for a universe in which the production of knowledge is not simply the prerogative of those for whom lifeworld is the Athenean university, monolithically conceived. 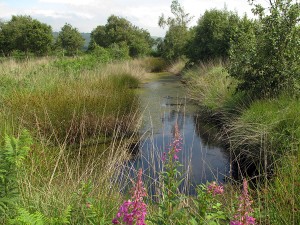