The Wheel of Fortune will continue to turn | Iain Biggs

I’ve always loved old medieval woodcuts like this that served as the prototypes for what we now call Tarot cards (for which I had a certain fondness in my youth). 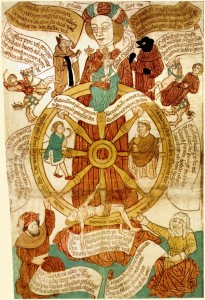 The ‘Wheel of Fortune’ has been rather on my mind. Having been ill with ‘flu and a chest infection for a couple of weeks I’ve spent a fair bit of time in bed and have been listening to a lot of music. That has including revisiting the Grateful Dead who, as part of their 50th anniversary celebrations, recently issued 30 Trips Around The Sun, a four CD collection of outstanding live recordings of concerts, one for each year of their existence. They have a song I love called The Wheel (not on 30 Trips Around The Sun, but there’s a truly great version from 1977 on their Dick’s Picks 34 CD). I always think of this song as a modern – and it seems to me very American – update (in song form) of aspects of the spirit of the Tarot Wheel of Fortune which, given Robert Hunter’s eclectic interests, may be one point of reference for the lyrics. (To what extent Hunter – here and elsewhere – bucks the usual America trend and actually trades on irony is not a topic I’d care to speculate about). However, as with any Grateful Dead song, it’s the combination of these with the particular way the music – in this case by Jerry Garcia and Bill Kreutzmann – gets to be played on that particular night and the interaction of piano and bass with Garcia’s playing on that recoding brings out something special in the song.

Of course the reason the song has been on my mind is a major shift in my own family’s fortunes. My son having now finally been formally diagnosed as having ME, something his sister has had for some 25 years now, has been the final confirmation of something we had feared might be the case since back in the spring. In many ways finally knowing what is at stake is a help to us all. We can face the implications and start to plan and act together to make sure he gets through this situation as well as is humanly possible and, if at all possible, without having to compromise his PhD. He is currently staying with me so I find myself back on the Wheel of Fortune and returned to old paternal patterns as I resume the once familiar role of taxi driver, provider of meals, encouragement and support, etc. Although, of course, that ‘old role’ is now shot through with all sorts of new twists and turns. So to paraphrase/rewrite Robert Hunter I find that, just as I’d thought I would settle into a more or less predictable set of new roles with our move, the wheel is still turning and I can’t slow it down, let go of it nor, it seems, exactly hold on to it either. Certainly I can neither go back nor stand still, and am left having to accept the idea that: “If the thunder don’t get you then the lightning will”.

This being the case I’ve decided to take each day as it comes, while making sure that I find time to collect material for and start to make plans for some new art work as a reminder that, since we live in a polyverse, it should always be possible to find space in which to prepare for new possibilities to emerge.