‘Reasons for…’ (part two): an invitation on the cusp of the year | Iain Biggs 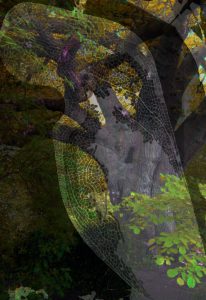 After putting up my post on December 7th – Reasons for proposing a hedge school (part one) – I started sending out invitations to people whose work speaks to me, some but by no means all of whom are involved in deep mapping. I invited them to send me a ‘guest post’ to go up on this site. This could be on any topic, up to 2,000 words in length, and illustrated if appropriate.

As this blog shows me, I’ve been toying with this idea since 2015. The recent reasons I gave for this were, however, still set out in a language that, while accurate enough, increasingly feels stilted and inappropriate. I want to facilitate something I called a C21st hedge school, a post-disciplinary exchange that’s not bound by the presuppositions of either the art world or the universities. But I’m increasingly thinking the shift I’m looking for needs to include the language I use to describe it. There are various reasons for this, one of which has to do with the work of Val Diggle. After attending her doctoral viva as an examiner I realised that her PhD has taken the possibilities inherent in deep mapping into a new place, and in doing so clarified many of my own concerns.

Back in March 23, 2014  I wrote that I wanted to explore the possibility of a community of transverse action. I took the term ‘transverse’ – from Felix Guattari’s book The Three Ecologies – as referring to a working or cutting across of existing social presuppositions, assumptions, and hierarchies and the disciplinary, professional, and other structures both built upon and sustaining them. I think the ability to engage in this transverse activity is closely related to Geraldine Finn’s understanding that we are always both more and less than the categories that name and divide us. Action here is used in the sense proposed by the philosopher Hannah Arendt, as the vital act of keeping-open human horizons. For Arendt, action manifests both the capability to initiate – to begin something new, to undertake the unexpected and a commitment to plurality; that is to the presence and acknowledgment of others. These two qualities give action its social value and meaning. Action then is the enactment of the relationships between material environments, social relations, and the inter-subjectivities that animates the ecology of becoming. But all this is set out in an academic framework that I now think needs repositioning.

Thought of the Heart

Another way to explain why I feel the need for a change is by quoting from the biography of Flora Buchan that I’ve been working on for the last five or six years. In a letter to me she writes that maybe I need to ask myself: “what really lies behind all the ‘deep mapping’ you’ve done?”

Drawing from Joan Didion’s ‘On Keeping a Notebook’, she identifies herself as one of: “a breed apart, lonely re-arrangers of events, somehow always anxious and dissatisfied, maybe with longstanding resentments or a sense of loss.” One who keeps notebooks as: “a way to stay in touch with the life that always exceeds what we can call ‘mine’, with a world and all that is intimately bound into it, all the kith and kin.” In sending her notebooks to me to work with, she suggests they may be: “a useful counterpoint to all that scholarly plundering and sifting … My ‘heart work’ to your ‘head work’, if you like”.

Flora was an ‘invisible friend’ of the best kind, someone whose ‘heart work’ has balanced my own ‘head work’, allowing me to recognise an important impasse. Namely, that the language I’d evolved to discuss the protean ‘space-between’ the worlds of art and the university, the space in which open deep mapping can take place, is in danger of cutting me off from “the life that always exceeds what we can call ‘mine’,” from the wider ecology named by the old phrase “kith and kin”. So, I’m trying to open an exchange with people I regard as tuned to that ecology, in the first instance by creating a shared platform.

If the use of that platform gains any kind of purchase, then we may have a basis for something useful, a ‘hedge school’ made up of learner/teachers and teacher/learners, or whatever we choose to call it.