I sometimes worry about my being ‘bird-brained’. By which I mean unfocused in my reading of both texts and other people’s art work. Unfocused in the sense that ‘my’ thinking moves me across different fields and areas of interest somewhat in the same way a small bird might flit from seed source to seed source or, like a swallow, hunt insects on the wing by darting here and there. What reassures me somewhat is that, like these birds, this apparently erratic activity is driven by a desire to feed.

So while it’s true that my attention seems, at least on the surface, to flit randomly from one field or idea to another, this way and that, there is I believe some sort of pattern being played out in this process.

These thoughts are prompted by the fact that I have been immersed in an extended bout of reading, one that has recently taken me, for reasons I can only half-identify, from Claude Lecouteux’s Witches, Werwolves and Fairies: Shapeshifters and Astral Doubles in the Middle Ages to Eduardo Kohn’s How Forests Think which, although I’ve only just finished it, I’ve now started to re-read in tandem with Kaja Silverman’s extraordinary Flesh of My Flesh (which I picked up on because Kohn quotes it). I suspect that what each of these texts does, each in its own very different way, is encourage me to ask fundamental questions about our presuppositions as to what constitutes ‘an individual’. So, somewhere behind this birdbrained flitting, there is I think a half-formulated desire to open myself out more fully to the multi-natural, multi-cultural polyverse I’ve been trying to engage with intellectually.

This sense of ‘opening out’ has already had a practical impact, sending me back to making object/images.

The fragment below, made up of map elements, is based on two aspects of my childhood that involve my father: a recurrent nightmare on one hand and his identification with the west of Scotland and, more specifically, with Skye, on the other. Half-way through working on the original piece from which this fragment is taken,  I remembered the Marshall Islands stick charts that I used to include in talks on deep mapping because they so immediately represent a mapping ‘read’ through the hand as much as through the eye (or so I like to imagine). 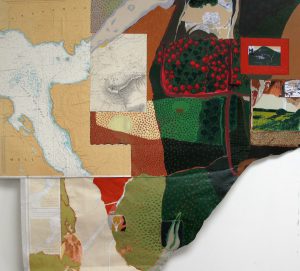 In the context of my first ‘mapping’ this remembrance became linked to Kohn’s discussion of the value the people of Avila place on multi-perspectivalism (which I found resonated with my own concern with the polyverse) and, retrospectively, with Silverman’s discussion of translation, something I’ve been pondering in an art context for a while as part and parcel of conversation as an art. Anyway, the result of this process of intuition, reflection, and digestion appears below. That the occasion that this double mapping responds to is, primarily, my childhood nightmare of a recurrent meeting with an enormous wolf (see The Prelude to Between Carterhaugh and Tamshiel Rig: a borderline episode pp. 16-17) seems to me ultimately less important than the desire to bring together two distinct ways of accounting for an event in a specific place, a double mapping. 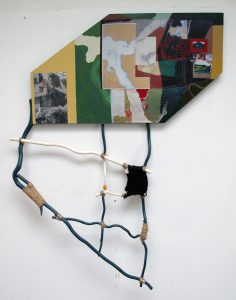 When I came across the original image of the whispering girl now reworked and adapted and included on the left hand side of this piece, it immediately resonated very powerfully with me. I now sense that it acts as a vivid analogy for the figure of the Fylgja discussed in Lecouteux’s book; that she resonates with my response to Silverman’s discussion of Rilke’s dead sister as an Eurydice figure, and that all this ‘unspeakable’ convergence of different resonances appears to have been taken up through the making process in the wing-like form of the piece above.

The danger of writing about this is that it could appear that what I am making is dependent on, or seeks to illustrate, what I’ve been reading. That’s not how I see it. What animated my reading Lecouteux in the first place was a gut feeling that, while there is for me great value in Guattari’s notion of ecosophy, what is neglected in my relationship to it – and I suspect this is not just a personal issue – is attention to it’s relationship to making in terms of the ecology of the personal, psychic, dimension. That’s to say, we may be unable to think the social and the environment differently until we can think our multiple selves differently. This thought is, it seems to me, implicit in Kohn’s call (after Ghassan Hage) for “an ‘alter-politics’ – a politics that grows not from opposition to or critique of our current systems” (the basis of so much ‘alternative’ activity in the arts and academia), but rather “one that grows from attention to another way of being, one … that involves other kinds of living beings” (p.14). And, if both Silverman and Kohn (supported by James Hillman) are correct, ‘living beings’ here also includes the dead, understood in the context of Richard Kearney’s conception of testimonial imagination.

Intellectually speaking, I am rather out of my depth here, simply feeling my way intuitively on the basis of the liveliness of an inner response to texts containing ideas I only half understand, and even that half imperfectly. So the making I find myself doing is an attempt to both ‘ground’ and ‘map’ the movement of an powerful intuition, using my own experience, in dream or otherwise, as a route into the living space these books are opening up for me. Another form of ‘deep mapping’, maybe?