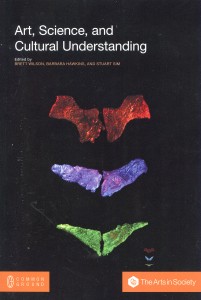 This book, in which I have a chapter and a co-authored chapter,  is edited by Brett Wilson, Barbara Hawkins, and Stuart Sim. The publisher’s blurb reads as follows

Art and science are often seen in contemporary Western society as almost entirely separate and polarised fields of human enterprise. In contrast, a growing number of practitioners are realising that art and science are both intimately concerned with how we conceive of the world around us; not just as individuals, but also as societies. Art and science share a common embodied imagination, cognitive creativity, and independent spirit of inquiry at their heart, and both can summon up the visionary power of revolution for our senses.

The editors and contributors to this book clearly highlight the many underlying themes that have always connected art and science throughout our history and show, through a range of essay styles and voices, how a hybrid art-science movement is now emerging. This new movement offers a broader trans-disciplinary perspective to avoid relying on narrow specialisms and short-term fixes when addressing growing global problems such as climate change, economic instability, and provision of food, water, and healthcare for a rapidly expanding world population. Practitioners, researchers, and students in the arts, sciences, and humanities will all find much in this volume to stimulate and inform new ways of thinking about their own disciplinary approaches.

Brett Wilson took early retirement from his professorial post as a university scientist to become a “scientist in residence” in an arts faculty.

Barbara Hawkins is a university-based arts educator and film maker with a special interest in practice-led arts research.

Stuart Sim is retired professor of critical theory and 18th century English literature and a widely published author. They have worked together for a number of years on previous projects and are founder members of Project Dialogue.