Almost the first thing Mrs. Oliver did when she moved in with Lizzy and Sarah was to ask if she could hang an old photograph from Homehaugh on the kitchen wall. When it was up she’d regularly glance at it, fondly but reverentially, as a devout Russian Orthodox believer might at an old family icon.

In that photograph, she’s about fifteen and looks assertively out from the middle of a group of bell-ringers. A rather short, serious-looking girl in school uniform who is already becoming the woman I’ve known since I was eight. On her left a taller, thinner girl with glasses, Millie, identically dressed but for white ankle socks. She looks as if she’s about to giggle. There are eight older men and one younger, who wears an ill-fitting double-breasted jacket. Finally, there’s a schoolboy about the age of the girls. Everyone looks very serious except Millie and the younger man.

This photograph now hangs in Lizzy’s kitchen next to an old child’s blackboard where farm and household tasks are written and erased daily. It overlooks the big kitchen table with its dark green legs, draws for cutlery, and ridged and knotted pine top. The house revolves around this table, located as it is between the yard beyond the back door, the farm office and passage that leads to the sitting room, and a shabby utility room dominated by a big old washing machine that’s always busy. It’s the hub of a working world-without-end, now watched over by Mrs. Oliver’s bell ringers. They used to face the kitchen window at Homehaugh, the house where Lizzy and her sister Kate were born and grew up. There, from opposite the massive double sink, they looked out across the narrow back lane, the small home field and churchyard, towards the high hill above. 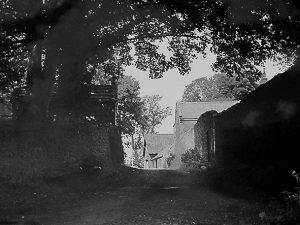 That photograph is also witness to a lifetime of Mrs. Oliver’s cooking. To thick yellow scones, large uneven loaves of brown bread, crusty meat pies, and the almost black rich fruit cake that always appeared in our bait-boxes on holiday trips, walks or rides out. To eat that cake again now is to return to childhood, to meals in the hidden river valley or the hills, the taste of many expeditions. And to drinking sweet tea out of chipped enamel mugs in the big shabby back room at Homehaugh itself on wet winter Sunday afternoons. The smell of cooking would waft in to where we all sprawled, us girls chatting with half an ear on the boys’ squabbling and to whatever music James was currently playing: Dylan, Them, The Animals, The Rolling Stones, The Grateful Dead, The Beatles, Jefferson Airplane, Leonard Cohen.

Mrs. Oliver cooks less now and Lizzy is reluctantly stepping into her shoes. Reluctantly because she’s so busy on the farm, but also because she knows she’ll never cook as well as her mother and has a competitive streak. Mrs. Oliver helps her cook weekdays and, at weekends, teaches her granddaughter Sarah. That, along with her regular glance towards the bell ringers, suggests she’s feeling her age. I see these things because I’m in and out of that kitchen all the time. 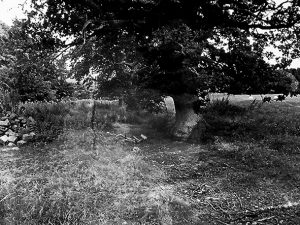 I learned from Lizzy that her mother met Elizabeth Aitcheson (then Elizabeth Reed) as a canteen manager in the WAAF. Lizzy is named after her and because of that friendship they moved to Homehaugh in 1954, shortly after old Mr Oliver died. Elizabeth Reed’s older brother, a bomber pilot, was killed late in the war and her younger brother, a soldier who became a Japanese prisoner-of-war, died in 1947. At that point, Elizabeth Reed left home. (The locals always assumed there was a man involved, something Mrs. Oliver dismissed as empty gossip.) Elizabeth only returned after a car accident that left her permanently lame. Her father, old Mr Reed, never recovered from losing the boys and wanted to make a male cousin his heir. There was a monumental family row of the kind we specialize in on the Borders and have done from time immemorial. In the end, a formidable great aunt of Lizzy’s brokered a compromise whereby the estate was put in trust, although this involved certain conditions that put Elizabeth under pressure to marry. She left home again when she could and only returned when her father was dying. (Her mother had died four years after her younger brother was born.) Then Elizabeth suddenly married Sir William Aitcheson. Handsome, titled, a decorated war hero, well-connected in both the business and political worlds, he was considered by the Reed clan to be ‘a very good catch’, not to mention ‘a remarkably good fellow’ for marrying an eccentric, if wealthy, cripple. It was clearly a marriage of convenience from the start, since they mostly lived apart. She up here, him in York or London. He got his big country estate and shooting parties each summer; she her sons and a loosening of the trust’s hold on the estate.

Lizzy’s parents were uneasy about Sir William from the start. They felt he took too much for granted and, while Mrs. Oliver wasn’t entirely immune to his considerable charm, she thought him untrustworthy. Mr. Oliver disliked him from the start as a smooth Public School man, a snob, and an ‘incomer’ (conveniently ignored the fact that the Armstrongs have always been a Name to reckon with in the Borders.)

Personally, I think Sir William was predictably true to type, but with the savvy to find new ways to underwrite his traditional presuppositions about family, class, and entitlement. But then Lizzy would say I’ve always been unnecessarily critical of our landowning class since I went to London.