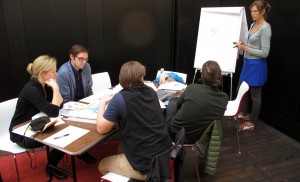 I have just attended a very thought-provoking and I hope productive two-day workshop on ‘resilience’ in Groningen, organised by Melanie Bakema, Britta Restemeyer, Elen-Maarja Trell, and Gwenda van der Vaart, who are all either teaching or undertaking doctoral work at the university there. The workshop was organized around four presentation ‘tracks’, each with its own keynote speaker; a field trip into the region that included a number of site visits and brief talks by local officials and others; and finally a brainstorming and report back session on the final afternoon. (My own contribution was to give the keynote for track two, which explored the social side of resilience and the possible role of art in that). 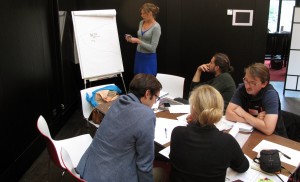 The contributors to this track gave us insights into a range of topics, from resilience in urban slums in India and among women in coastal communities in the Philippines to issues effecting the local communities in the north of the Netherlands, for example the Wadden area. These were all interesting, with unexpected insights coming from topics in which I might not have expected to find them. Of particular interest to me personally where presentations from Jessica de Boer, an artist/researcher who spoke about co-evolutionary behaviour in relation to integrated energy landscapes; Victoria Brown, who presented a telling paper on the impact of coastal erosion on coastal communities in north Norfolk – this coincidentally related directly to Simon Read’s work further down the coast, which I referenced in my presentation – Sebastian Becker, who talked about projects demonstrating the potential value of permaculture; Jethro Brice and Seila Fernandez-Arconada’s on socially-engaged art practice; and Gwenda van der Vaart’s on her work looking at the uses of art in building community resilience. 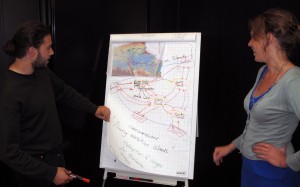 To put the workshop in context it’s important to point out that Groningen is the main city in a region that is in decline in terms of its population and, to some extent, its economy. In both cases this is linked to the fact that both the region – and indeed now the city itself – are increasingly suffering from earthquakes as a result of decades of gas extraction by a company part-owned by the Dutch Government – a factor that gave the workshop a real sense of social and political urgency. Interestingly, there is local anger and related political activity but, it seems, in the context of a majority view (53%) that believes that ‘keeping quiet’ is probably the best option. However, as the safety of individuals is affected by property being weakened or damaged, this may change. Significantly, the Government itself siphons off the several billions of euros that constitute the annual profits from the gas extraction, while still (presumably) considering itself to be the ultimate representative of the Dutch people (or rather, perhaps, those of the people who do not live in regions effected by the earthquakes).

Quite apart from the usual issues of the duplicity of Governments when working hand-in-glove with business to the disadvantage of a proportion of the electorate, the workshop and the socio-environmental circumstances informing it served as a stark and timely warning in relation to the likely consequences of fracking in the UK. Sadly, given the combination of naked greed, insularity, and chronic lack of vision that characterises the present British government in pursuing the policies it does on energy (and indeed on almost everything else), nothing that happens in the Netherlands could possibly be allowed to get in the way of its policies! 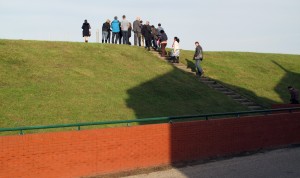 Perhaps the most interesting and unusual aspect of the workshop was the final session, in which we were reorganised as new four groups, each with members drawn from different tracks. These were each tasked with creating an outline resilience strategy for Groningen on the basis of what we’d seen and heard – all in about two hours! I have to say I though initially that it would be impossible, or rather that we’d produce something too hasty and superficial to be of any real value. However, I had seriously underestimated the ability and capacity for teamwork in my own group. In addition to Jessica de Boer and myself from ‘track two’, this turned out to include some very focused and thoughtful contributors from other tracks. Having been reminded the previous day that it can take a couple of years for academics in an interdisciplinary research unit to understand each others’ language, it was both very heartening and a little surprising to see how quickly the group sorted out priorities and agreed a way of organizing and presenting our thoughts – a process that appears to have been replicated in the other three groups. Although obviously we could do little more than sketch out a proposal in the time available, I was impressed by the enthusiasm, attention to detail, and degree of mutual respect within the group and by the fact that our proposal – although sketchy in many respects – did have a workable sense of process considered, informed detail, and democratic inclusiveness, along with a genuine sense of vision that I would not have thought it possible to achieve in such a short space of time. 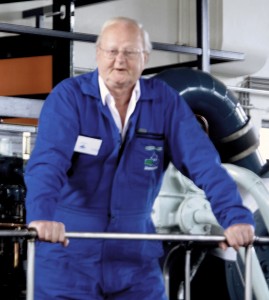 There’s obviously a lot to think about here. Among other things the workshop demonstrated that there are plenty of good, grounded ideas about place-building the reanimation of questions of community, ‘resilience’ (a term I personally find deeply suspect – preferring the more vernacular notion of ‘coping strategies’ – a phrase proposed as an alternative by the landscape architects Maggie Roe and Ken Taylor). There was also a sense of both the issues of political pragmatics and vision and the corresponding need for practical understanding of the issues around implementation of any strategy for the area. All this suggests to me that we might need to pay more serious attention to the following.

Firstly, ensuring that younger researchers and others are enabled to have the closest possible dialogue with a wide range of ‘lay’ constituencies and that this is understood in the context of a broad-based, ‘multi-constituency enquiry’ and NOT as ‘interdisciplinary research’, a term that signals a tacit denigration of those skills and understandings that draw on experiences that are not authorized by disciplinary academic knowledge. Secondly, that flexible policies need to be in place that allow for the accessing the widest range of ideas and strategies that can be generated by mixed skill and disciplinary groups when these are given a clear focus, as happened during the workshops at Groningen. Finally, genially socially engaged institutions need to find ways to ensure that they do whatever they can to ensure both that these ideas and strategies are taken seriously by those with the leverage to do so and that they are constantly debated and reformulated by being taken back into the region for further discussion. This process needs, however, to ensure that it generates productive action, since without this it will degenerate very rapidly into the kind of rudderless talking-shop that currently seems much in evidence when it comes to thorny issues like the liability of the company responsible for the gas extraction. 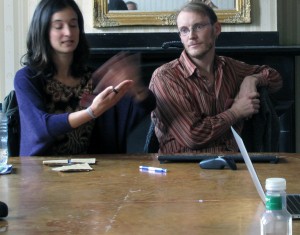 The response to my own presentation and the insights of others presenting in track two suggests that there is an important role for those able and willing to work imaginatively and creatively as ‘lifeworld translators’ in the sense I proposed. As I suggested at the end of my presentation, in different ways and in different contexts, projects already under way are working to facilitate new coping strategies by making space for the empathetic imagination necessary to shared ethical action – including political action. They do so by translating across lifeworlds normally assumed to be insular ’worlds-unto-themselves’, by listening out for the anomalies that might allow people to re-narrate those insular worlds in other, more open and empathetic ways. They invite exchange between global knowledge and local understanding, between professional practice and lay skills, between all the multiple elements of lifeworlds as polyverses. And if they facilitate ‘resilience’, it is a shared social resilience that collectively chooses to face, rather than resist, radical change.