I’ve not been adding much to this blog for quite a while because, apart from the usual stuff noted in the last post, I’ve been trying to pull together some visual work that I began about three years ago. The sense of this project has been slow to emerge, and at present it’s provisionally called: Remembrance (Debatable Lands) and may finally turn out to be the conclusion of the Debatable Lands project that I began in 1999.

To date the material consists of a sequence of initial images – many based on on a series of drawings/installations made in the studio – along some of my landscape photographs from the Borders. Each of these square images is then given a ‘heading made up of an additional pair of images. These have been made from a combination of ‘found’ and my own photographic images. I’ve now got to the point where these have all been brought together as a series of thirty two digital collages. Each of these composite collaged images (see examples) will be digitally printed, worked over in various ways, scanned and, when this process of alteration and re-scanning is completed, “bagged” in some way – perhaps with other small objects – to form a sequence of object/images. 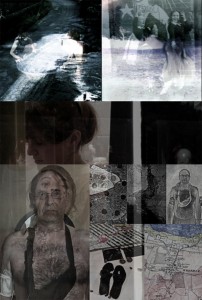