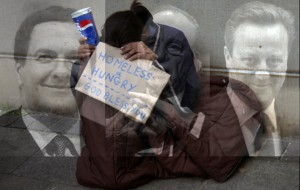 It’s hard to write anything positive in the wake of the election results this morning.

Although the final results were not all in as I write this post it’s very clear that, once again, a tired and morally bankrupt status quo has managed to perpetuate itself by playing on the fear and manufactured ignorance of a large part of the electorate. It no longer matters whether this manifests itself via the Conservative mainstream, its supposedly ‘down-to-earth’ UKIP shadow, or a Labour Party that has become little more than Conservative–lite. What is very clear is that we are seeing the triumph of the culture of possessive individualism epitomised by Margaret Thatcher’s “there’s no such thing as society” – an ideology that has managed to play on a multitude of fears to ensure that the rich will continue to get richer and the sick, poor, and the majority of young people will suffer further as a result.

To put this in perspective, it’s worth looking at the Executive Summary of a report published by Church Action on Poverty, The Trussell Trust and Oxfam in June 2014. This points out that, while the UK is the seventh richest country in the world it is increasingly deeply unequal. The richest 1% owns the same amount of wealth as 54% of the population. Furthermore the 1,000 richest people in the country saw a 100% increase in their wealth in the past five years and, of course, are now set to see this growth continue while the millions of families in the UK living below the breadline see their situation worsen. The report notes that Oxfam and Church Action on Poverty calculate that in excess of 20,247,042 meals were given to people in food poverty in 2013/14, a 54% increase on 2012/13. Add to this that “more than half a million children in the UK are now living in families who are unable to provide a minimally acceptable diet” and you get a very clear sense of just what Margaret Thatcher’s much vaunted “return to Victorian values” has meant in practice.

In the run up to the election the Tories have argued that they have increased jobs, yet “despite their best efforts, many people cannot earn enough to live on”. The report points out that:

“UK food prices have increased by 43.5 per cent in the eight years to July 2013 and food expenditure as a proportion of total household expenditure has continued to rise. The UK has one of the highest levels of housing costs in Europe, while between 2010 and 2013 energy prices for households rose by 37 per cent. At the same time, low and stagnant wages, insecure and zero-hours contracts mean that for many low-income households, the money they are bringing home is less every month than their essential outgoings”.

The summary adds: “Evidence shows that changes to the social security system are a driver of food poverty. Cuts to social security since April 2013 have had a severe impact on poor and vulnerable families across the UK. These cuts have been coupled with an increasingly strict and often misapplied sanctions regime – 58% of sanctions decisions are successfully challenged”. This is both evidence of the punitive ideology driving Tory policy, and indicative of the fact that “many people needlessly suffer a loss of income through no fault of their own. The abolition of the Social Fund has prevented thousands of households from being able to access crisis loans. The Trussell Trust, the largest food bank network in the UK, estimates that 49 percent of people referred to food banks are there due to problems with social security payments or because they have been refused a crisis loan”.

And the ideologically-driven war on the poor, sick, and marginalised that these facts and figures represent will now be intensified.

On the positive side, however, the election has meant that the Liberal Democrats have quite properly been wiped out as a credible political party. They have paid the price for the cynical betrayal of their electoral pledge on education last time round and for propping up of a Tory Government hell-bent on delivering a punitive austerity programme that is as unethical as it is unnecessary. As I write the Liberal Democrats have received just 1% of the total vote – in contrast to, for example, the anti-austerity Scottish National Party’s 9%. In this context it’s worth reflecting on comments made by Caroline Lucas, who won Brighton Pavilion for the Greens on an increased majority.  Ironically, in noting that “almost a million people voting Green” she is echoing UKIP’s Mark Reckless in pointing out that the results have shown “the political system in this country is broken”. She adds: “it’s ever clearer tonight that the time for electoral reform is long overdue, and it’s only proportional representation that will deliver a Parliament that is truly legitimate and better reflects the people it is meant to represent.”

So the choice is clear. If anything like a representative democracy is to be restored to these Isles, the unrepresentative system that sustains the current toxic status quo must be dismantled. But of course I’m hardly neutral in all this. My daughter – subject to a long-term chronic illness and denied medicines that would help her – is in the front line of the Tory’s ideological war.

For her and her friends the results of this election are not simply profoundly depressing, they are potentially lethal.