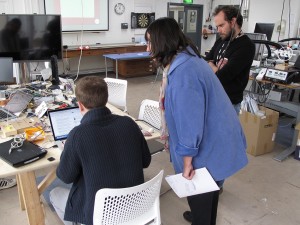 At the beginning of this month I attended a three-day research workshop set up by Mary Modeen at Duncan of Jordanstone College of Art and Design in Dundee. This involving herself, the sculptor Ben Whitney (a DJCAD graduate), and me working with the staff at DJCAD’s Digital Making Unit.

(Mary and Ben are the two standing in the photograph to the left here).

Our aim was to test out a number of approaches to combining an information rich digital delivery with a variety of technical means designed to evoke something of the sensuous specificities of any particular landscape location. What we wanted to work out were some of the technical issues and related practicalities that would be involved in creating a (at present hypothetical) digital deep mapping installation or DDMI.

We started from the simple supposition that any worthwhile DDMI needs to take as its starting point the creation of a physical installation that is specifically designed to maintain some sense of the sensual specifics of the particular physical location under consideration, while at the same time optimising the possibilities for communicating the complex layering of information made available by digital technologies. To do that would be to set up the basis from which to construct a physical SSMI. We were  particularly interested in how we might articulate the spatial/temporal dimensions opened up by the possibilities inherent in DDM.

Over the three days we were able to establish the working basis for constructing a practical physical unit – a viable ‘model’/digital projection scenario – that would provide just such a working model. This in turn has opened the door to the evocative articulation of multiple scales of location/information/narrative in relation to, for example: a core site, that core site within (for example) its watershed, and that watershed within the larger region, etc. – all within a single installation or exhibition space.

On a slightly different note, part of what made the whole event so enjoyable is that DJCAD clearly sets out to maintain an ‘Art School’ environment where it was not only possible for this kind of ‘blue skys’ experimentation to happen, but ensures that it does so in an atmosphere where students using the facility clearly felt comfortable with asking us questions and, in one case, sitting in at Mary’s invitation on our deliberations. Some of this appears to be a result of faculty policy, some of the particular relationship Mary builds with her Masters students.

Having worked for many years in an institution that had comparable technological facilities, but always appeared to have a tacit policy of discouraged anyone who was not a researcher on a grant-funded project from using them, it was a real joy to be working in such a genuinely educational environment.

I’ve included some general images below. (There’s other stuff, but it will remain ‘in the private domain’ for the present.

My thanks to all involved, particularly to Mary who made it all possible despite having 101 other things to do. 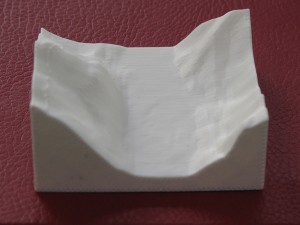 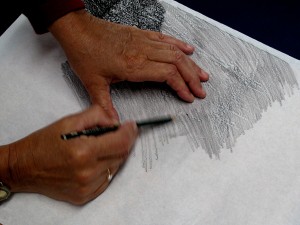 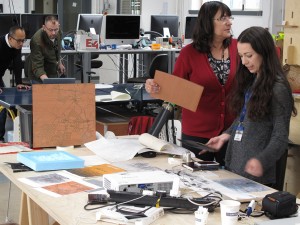