Editor’s note. Flora included among her notes various descriptions or ‘sketches’ of visiting local places at particular times, of which this is the first. These are, I believe, as much ‘portraits’ of her kith as are her descriptions of the children she grew up with.

The roar of the river descending is overwhelming – every surface throws back or drowns out all other sounds in this narrow place. I resist the draw of the falls and turn elsewhere – my attention running out ahead feeling its way into the complex tangle of saplings, fleshy plants, old fallen trees, then down to test out the uncertainties of the path as it turns suddenly underfoot – first scree, then mud, twigs, water, fractured rock, the path a fading trace. 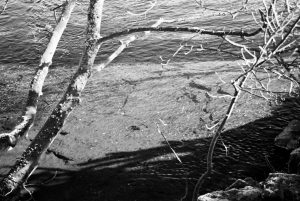 With the turn up hill my ears adjust, start to catch differentiations against the diminishing roar. The irregular and muffled ‘plock’, ‘plock’ as the stream pushes one stone after another over a lip of rock to fall onto the pitted shelf below. Sounds that appear to be the drowned ghosts of hard, clean, crisp sounds of stone and water; sounds that bypass my turning thoughts to work directly on the nervous system. These speak of the singular unity, weight and density of each small stone that falls. Beyond the wild garlic and saplings are the sharper notes of melt water finding its way down through irregular stone heaps, frost-shattered boulders, the iron-stained crumbling cliff. There are an infinitely variety of sounds of trickling, falling, spouting, running, streaming down. And back behind all this still further, there is a faint, counterpointing, rumble and boom of water hitting the black pool edged with shreds of swirling, soapy foam.

So, along with an opening up of and losing sight of what is in view, a shift dictated by the simple logic of following the path, the valley is simultaneously re-constellated in quite another way; as the damp, chill, all-pervading space of sounding water in all its variations.

As usual, I’d spent much of the Christmas holiday going down to the farmhouse to visit Lizzy, Sarah and Mrs. Oliver. This must be eight or ten years back now.

Lizzy had dropped Sarah off at a party early in the evening of New Year’s Day and, on her return, we started to tidy up the aftermath of the festivities. Then the phone rang. There was a pony out on the road above the ford and could Lizzy please help catch it? Mrs. Oliver hears well enough when she wants to and, as Lizzy put the phone down, she asked me if I’d go instead. Lizzy started to protest but, when I agreed, shot me a grateful look. I knew only too well how much she always missed Peter over the Christmas period. I put on coat and boots and went out into the rain.

When I got back the kitchen was immaculate and Mrs. Oliver was sitting straight-backed in her chair, a sherry bottle, two old wine glasses, and a large wide-necked plastic container of mixed nuts on the table in front of her. Without speaking she poured me a large glass of sherry and pushed the nuts towards me. Pulling off my coat, I caught sight of the photograph of the bell-ringers and, on a whim, asked who they were.

I thought she’d decided to ignore my question but, after a sip of sherry, she adopted the storytelling voice I’d not heard since Sarah was little. She’d clearly been on the sherry some time.

She wasn’t particularly keen on bell ringing, but she was keen on the boy second from the end on the right. (She referred to him variously as ‘the boy’, ‘Bill’ and ‘Billy’, always with affection.) They were second cousins once removed and, looking carefully, I could see that his face somewhat resembled hers, round, strong browed, serious. She didn’t remember much about the rest of the group, only Billy and her friend Millie, but thought the younger man in the over-large suit was arrested in 1945 for selling black market goods. Billy was involved in bellringing because his uncle was both a church warden and a bellringer. Having persuaded Millie to sign up with her for moral support, Mrs. Oliver set about getting Billy to walk them home. (Millie lived two doors down.) As soon as she did Millie, now redundent, was allowed to gave up bell ringing. That happened shortly after the photograph was taken and, with Millie out of the way, Mrs. Oliver could focus on Billy.

They started walking out together properly when she was seventeen and, when Billy became an apprentice motor mechanic, she found weekday work cooking in a little hotel near the garage where he worked. Despite the hours, she and Billy managed to see a fair bit of each other. When the wat broke out and he was drafted into the RAF, she somehow managed to get work in catering at the big airfield where he was based. She then joined the WAAF when she was there and eventually rose to corporal. While she was there, she met Aircraftwoman 2nd ClassElizabeth Reed. Despite their different social backgrounds, the two women became lifelong friends.

Billy died just outside Caen, the result of burns following an accident. The two of them had promised his uncle they’d go back and ring the bells when the war ended, but when it came to it she hadn’t the heart. After her mother’s death she found the bell-ringers’ photograph among her mother’s things.

After the war she’d returned north to a job managing the canteen at Oliver and Son, an agricultural suppliers business. There she met young MasterMichael, a decorated soldier and a Socialist in a largely Tory world. She danced with him at the 1947 Christmas office dinner and accepted the offer of a lift home afterwards. After a short courtship they married. She’d wanted lots of children but he hadn’t. Once his father died he put the business first, something she took in her stride; that, his politics, and the charity work he did with his Polish friends. They had the two girls and, she added fondly, later you and the other children would always be around and needing to be feed.

When she’d refilled our glasses a second time she asked about men in my life. Taken aback, I meant to give a quick answer and go home. But the sherry got the better of me. I told her that after Hamish I went off boys for a good while. I didn’t mention Mario. Instead I told her about London, the strangeness of living among people I knew nothing about, and who neither knew nor cared about me. About how, as a a child, I had longed to be just myself, Flora, not ‘Andy Buchan’s daughter’ or ‘one of the Oliver girls’ gang’ and, in consequence, how London had given me both a real shock and a new sense of identity. Finally, I told her a little about Quentin and my leaving him to return north.

‘Not much luck with the men then.’

I didn’t answer. I knew I should go home but it was blowing a gale again outside, the rain hammering the corrugated roofs of the outbuildings and clattering a metal bucket somewhere in the yard. I told her Quentin had been desperate to be a successful painter, and I didn’t want to play second fiddle to that. I didn’t tell her about going back to our flat with a sick headache one lunchtime and catching him and a voluptuous Spanish Masters student in flagrante delicto on our bed. I’d known for months we were drifting apart, but it took the shock of that betrayal to finish things between us.

‘Nobody local courting you?’

After another silence, she asked me what I was thinking. I had in fact been thinking wistfully about an all-too-brief affair in the last days before I left London, but I said I wished I’d been like Lizzy, set my heart on one man when I was young and, for better or worse, waited for him. Even I could hear just how maudlin that sounded.

‘Lizzy’s life’s been more complicated than you think.’ 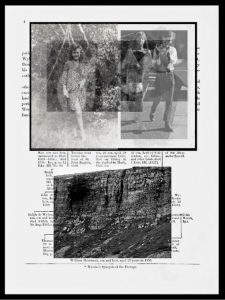 The rapid call of oystercatchers that rise and swerve sharply away, a flurry of black and white avoiding our advance, breaks into my reverie. From the distant hillside, now thick with flowers, come the barely audible sounds of sheep, curlew, lapwing. A small cloud of fieldfares rises from beyond the tree-covered bank and is swept away by a wind that does not yet reach down into these broad, sheltered, pool-dotted flats that run up alongside the upper burn above the gorge. 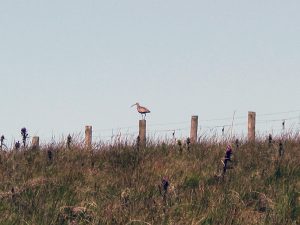 Closer at hand there is the ever-present plash and tumble of water that, combining with the unexpected warmth of the sun, becomes a soporific. The zigzag of ripples where we step across the narrowing burn echoes the strange, rhythmically stabbing heads of two goosanders working against the swift current in the river, now far below. Topping the steep bank above the ford we re-enter the realm of wind, its sound once again battering all else away from the inner ear. Everyday time returns. 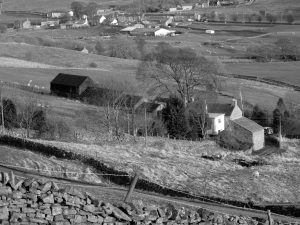