I can quite easily name some of my day-world selves. There’s the practical and pragmatic ‘countrywoman’ who is intermeshed with Lizzy’s local and regional worlds. Then there is her intellectual sister, the somewhat brittle ‘cosmopolitan’ or ‘European’ who learned her politics (and no doubt her tendency towards disdain) in London. Then off a bit to one side of them, and always slightly detached, there’s the ‘Mender and Maker’, on whom we’re all economically dependent. Back from these three there’s the ‘Listener /Respondent’ who first contacted you and who, I suppose, is the dominant voice in all this writing. She hovers uncertainly between my day-world and the night-world selves, who I’m far less certain about.

Maybe because we only find each other on the edge of reverie, catch each other’s eye at twilight, ‘between the dog and the wolf’, and then whisper to each other while playing games of hide-and-seek in dreams. There’s certainly a girl like the thin, uncertain schoolchild who loved Cat and Kate so fiercely. But then there’s her brother (?), a strange boy who might be the double of Dad’s uncertain little daughter as she was on the cusp of puberty. There’s a gaunt, older, woman who sometimes wakes me at night, whose yearning for a helpmate and bedfellow still unsettles me. And there are many others, odder and more elusive. For example, a woman dressed all in green, young or old is hard to say, someone I once tried to paint. In my painting she was thin-lipped, angry, righteous, and pale as death. For reasons I no longer remember, I called her Our Lady of the Roadkill. There are also numerous other, shadowy, beings (human and otherwise), many of whom have stalked me since childhood and, maybe, before. The shadowy revenants and composites, including a person who’s somewhere between Mike and Hamish, and various doppelgangers of friends like Richard and yourself. 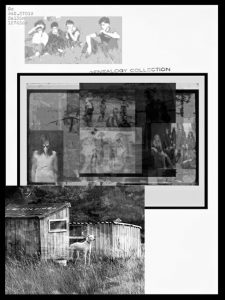 All I can be certain of is that all these figures are somehow part of myself and none of them quite what they seem. They’re one reason why I’m writing all this.

I sometimes wonder which animals would act as familiars if I were the ‘skinny little witch’ Lizzy once named me during a schoolyard quarrel? I imagine there would be at least three.

The first is called Finn by his owner. He’s a large white dog belonging to an ex-soldier who I greet regularly as he passes me on his bicycle. He and Finn live in a homestead made up of small sheds and a caravan, all set back from the path through the lower pasture beside Home Burn. Finn has the shed nearest the path but only barks if you go too close. He and his master appear disinterested, self-sufficient, uncomplaining. Both seem beings of considerable intelligence. I recently watched Finn as, untethered, he hunted rabbits across the low meadow and among the broom bushes that fringe it. He’s a swift and terrible killer. Mostly, however, he watches over the valley floor, its guardian and familiar.

The second is the large black cat who lives with Barbara Graham, a young widow, and her two boys in the end-of-terrace cottage next to the graveyard. The small steep fields above and below the terrace are his fiefdom, although occasionally I glimpse him much further away. (I assume from his swagger that he’s male.) I often notice him at dawn or around sunset, those in-between times. Then he haunts my peripheral vision, a lithe black presence suddenly animating some otherwise taken-for granted corner of land. He’s a mercurial figure, happy to mediate between my day and night worlds, moving purposefully or idly as suits him, out there at the edge of the human order and, sometimes, vast, shadowy yet soaked in moonlight, through my most private dreams.

I don’t know this cat’s name. He watches me speculatively when I past him, as if calculating something. Once he came slowly down the top of a wall and invited me to rub his head and under his chin before moving on. The quality of his purr was astonishing, a skin drum full of bees. He too is a skillful hunter and extraordinarily strong. I’ve seen him jump from the roadside to the top of a dry-stone wall with the corpse of a fully-grown rabbit in his jaws. I think he knows he has my greatest respect for this and his other qualities.

During our single face-to-face encounter, I was struck by the rough, luxurious density of his fur. He appears at a distance to be black but, in sunlight and close to, is a dark chocolate brown that shifts in intensity as he moves. The density and luxuriousness of his fur reminded me somehow of pubic hair. (I hear Kate say questioningly: ‘really, pet’, followed by her pirate’s dirty chuckle). That’s to say of the time when, a little girl of maybe five, I walked in unannounced on Aunty Claire to say I couldn’t sleep. She was standing with her back to me, quite naked, in front of the full-length mirror. Everything was dimly lit and smelled lovely and, in the mirror, I saw this thick luxurious dark triangle under her belly where I had only my little pale purse.

When I asked about it she quickly covered herself with a towel and laughed in that way adults do when they’re about to lie to children. She said: ‘Mummy will tell you all about it when you’re older’. But, of course, Mummy didn’t because by then she was dead. Ironically, it was Aunty Claire that Dad asked to explain the ‘facts of life’ to me. I’d known them for some time by then however, mostly thanks to Kate, but pretended I didn’t so as not to disappoint her. 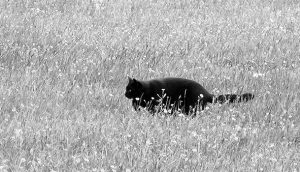 There’s something uncanny about this cat with his dense black fur, something that differentiates him from solidly literal Finn in the meadows below. There is absolutely nothing uncanny or liminal about Finn. What you see is what you get. The cat, however, while he is preternaturally present and so invites me to be the same, is equally familiar in the shadowed between-spaces that link day and night, insidious memory and lucid dream, together; as much a carrier of sleeping souls as of dead rabbits over seemingly insuperable obstacles.

There is a third familiar, one I find myself strangely reluctant to write about because I feel its silent presence as being close to the void of death. I identify ‘it’, (I cannot provide a gender) and, indeed, there may be a pair, with the great ‘white lands’ of the high hills, the bleached expanses of Molinia and other rough grasses up there where the hares dance and have their forms. Unlike the other two familiars, I see it in a space now almost entirely outside the realm of current everyday human concern, a creature of the night wind and half clouded moon.

It’s a great white barn owl that hunts among the tumbled walls and collapsing sheds either side of the top road. I usually see it gliding somewhere along the stretch of road that runs up under the long gray outcrop before it climbs the last ridge and takes you over into the next valley. I suspect this spectral bird nests in the last of the old quarry sheds left standing. I’ve seen it no more than a dozen times in almost as many years, although I drive that way at night at least once a fortnight during nine months of the year. But I always sense its presence there, wondering if the headlights will catch its feathered bulk in silent flight out over the night landscape. 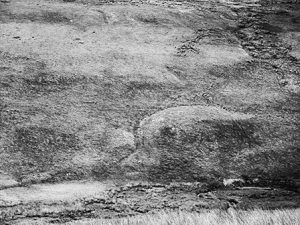