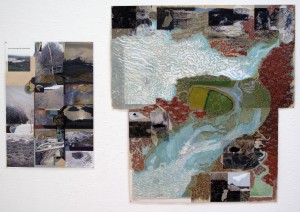 I’ve been working on Severn Waterscape (for Owain Jones)  a mixed media diptych (see above ). This piece has been made specifically for an exhibition at the RWA Bristol called Imagined Landscapes. The exhibition will open next week (on Friday February 5th) and then runs until June 12th.

Early on in the planning of this exhibition Gemma Brace, the RWA’s curator, kindly asked me if I would suggest some people whose work might be relevant, so in addition to her showing my own piece, I feel I’ve had some degree of input into the exhibition as a whole. Of the various artists whose work I suggested she might look at, I’m particularly pleased that she’s chosen to include works by Eileen Lawrence and Will Mclean, two outstanding senior Scottish artists who in my view are not given their proper due south of the Border, and the work of two very interesting younger Bristol-based artists – Seila Fernandez Arconada and Jethro Brice – who often work collaboratively.

Gemma writes that Imagined Landscapes “explores an alternative understanding of place in contemporary art and the role of the artist as spatial narrator, cartographer and geographer”, an approach which links closely to my own concerns with deep and narrative mappings. Originally based around the idea of asking artists to respond to the notion of ‘Wessex’ – as much Thomas Hardy’s imagined literary place as any kind of physical or historical entity– I think that the resulting multi-disciplinary group exhibition will reflect, to a greater or lesser extent, on the intersection of literal and imaginal spaces, sites where physical location, memory and the imaginal or even mythic constellate landscape as place. As Gemma also notes the exhibition is, perhaps inevitably, haunted by environmental concerns. I write ‘perhaps inevitably’ because I hold to Edward S. Casey’s understanding of place, one in which he differentiates between a position, taken as “a fixed posit of an established culture”, and our experiencing of place which, notwithstanding its normally settled appearance, he characterizes as “an essay in experimental living within a changing culture”.(Getting Back into Place: Towards a Renewed Understanding of the Place-World 1993 p. 31) Such a definition of place in our present time cannot but have some powerful sense of environmental concern inextricably woven into it.