Uplands consists of my text and images, supplemented by some additional images from the USA by Elizabeth Turrell. The three speakers and Mel Shearsmith, Yvonne Buchheim, and myself, and the singer is Victoria Walters. The sound was recoding and the piece produced by Mel Shearsmith. It was first shown in 2010 at the Experimental Gallery in Blacksburg as part of Mapping Spectral Traces-  – a trans-disciplinary and international Humanities Symposium, Virginia Tech, USA 12th – 15th Oct. and again at Poetry and the Visual Arts, Meantime, Cheltenham, 3rd April 2011. 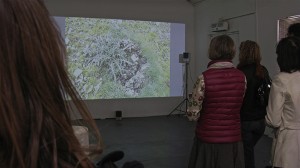 Uplands is a logical continuation of the Debatable Lands project and, at least for the present, has replaced the projected third volume in that series.

Between is an ongoing attempt to use a combination of fact, a mask, fieldwork, fragments of song, an ‘actor’, fiction, historical research and quasi-autobiography to create a particular kind of dense, layered response to the role that place and childhood memory play in our lives.

It is very loosely based on reflections about my relationship to two groups of people from my childhood and youth. In Kent and Scotland with my friends Nicola and  Tim Ruck – a poet and passionate bird watcher – who later killed himself, after years of managing chronic depression, as the direct result of the chemical mis-treatment by specialists that slowly destroyed his kidneys. That he chose to die rather than live tied to a dialysis machine was as much a testament to his love of the natural world as of his anger at the betrayal of trust that had left him dependent on a machine he loathed. But also with various members of the Polish community in London and Bristol, whose very particular spirit of resilience and passionate capacity for life and pleasure I could not match and deeply envied.