On Western Edges is is an unfinished (and now possibly unfinish-able) project that I began in 2008 by enamelling two objects – a builder’s trowel and a circular saw blade – with altered fragments of maps of two types of landscape they had been instrumental in creating. In the case of the trowel the various kinds of implicit and explicit ‘sea defences’ that determine the shore-scape between Avonmouth and Severn Beach on the Severn Estuary and, in the case of the saw blade, the forestry plantations that dominate so much land on the Isle of Mull. 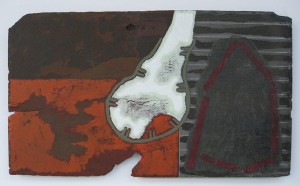 I carried both objects with me on fieldtrips to those places, photographing them in appropriate locations. However, apart from providing the frontispiece for the book On Mull (2009, Wild Conversations Press) made with my son Josh, these images only found their way into the performance presentation Spacings (2008), gaven in relation to the Performativities of Emptiness conference at which I also showed Hidden Wars.The two objects made in 2007 for the Avonmouth/Severn Beach AHRC workshop and fieldwork with LAND2 on Mull are, however, closely related to the On Western Edges wall-based work made in 2009. 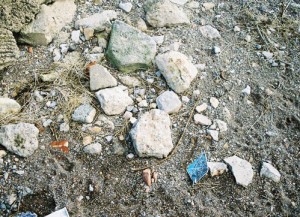 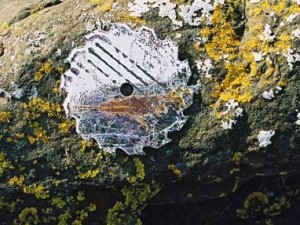 On western edges (‘a simultaneity of stories-so-far’).

It has always interested me that, in the pre-history of the Isles, the western sea (what we would now call the Irish Sea) provided the principle means of communication between groups of people who would otherwise have remained isolated because of the difficulty of travelling overland.

The literal subject of this series of works is the relationship between that history and two field trips in which I found myself oriented west (towards the sea). These came together as I  attempted to make sense of a difficult but fascinating book. 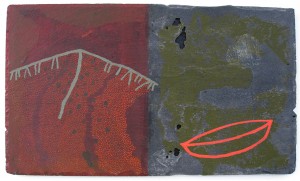 One field trip was based at Dervaig, on the Isle of Mull (see http://www.land2.uwe.ac.uk/mull1.htm) and the other on the littoral running between Avonmouth and Severn Beach, outside Bristol. The book is Doreen Massey’s For Space, which has provided the idea of space as ‘a simultaneity of stories so far’ – a “narrated space” in which we all have to find an identity, a sense of “being at home”, as best we can.

The expressive potential of everyday materials has always interested me and when somebody offered me a batch of old Victorian roof tiles these proved impossible to resist – both as physical objects and as resonant of wider notions of weathering and shelter. Unfortunately, once they were in the studio and cleaned up, they looked like proving equally impossible to work with – too rich and beautiful in their own subdued way for anything I could bring to them. Fortunately an old enamel piece turned up when I was tidying up the corner of the studio where I’d stacked them and its contrasting qualities – particularly it’s hard, “wet” gloss – next to the soft, dry slate suggested a set of material contrasts rich in metaphor. Those contrasting qualities then acted as a magnet to which the ideas and interests outlined above gradually attached themselves. 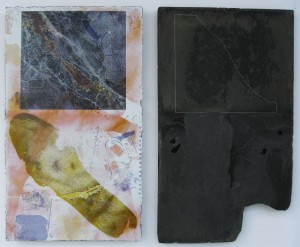 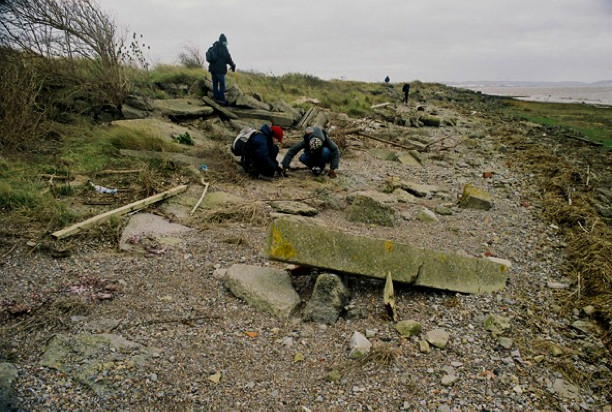 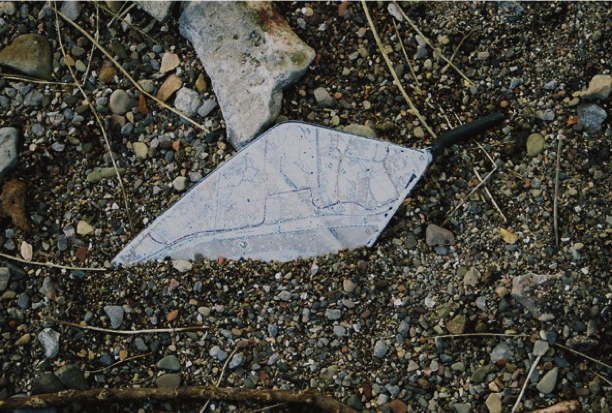