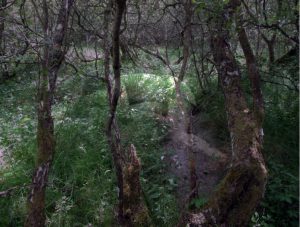 For the last five years I have been working on a text called ‘Convergences’, the last iteration of my ‘Debatable Land’ project. It is an attempt to address what the phrase ‘kith and kin’ might mean to us now.  As I start to bring it to a conclusion, then, the notion of friendship and memory is very much on my mind.  On Saturday I met up with a group of people, including some old friends, to mark one of our number’s departure to China for a year. Perhaps as a result, that sense of being preoccupied with notions of friendship was further reinforced.

To find a poet whose work is new to you and speaks to your heart is to make a new friend. Naturally, having discovered them, you want to get to know their work, to spend time with them. So, having recently come across the poetry of Naomi Shihab Nye and been very moved by it, I wanted to read more. I always feel guilty about buying too many books but, despite that, have now bought several of Nye’s, second-hand, on line. Today the first one, ‘Tender Spot: Selected Poems’, arrived in the post. (My wife then opened it by mistake, thinking it was junk.)

As it happens, my new book has a hand-written dedication on the flyleaf, as follows:

For Pinar and Memet, new friends – with all my heart of respect and pleasure!

While I was making dinner, peeling the carrots and preparing the spices for the cauliflower dish my daughter particularly likes, I wonder about Pinar and Memet. At first, I was just puzzled, wondering what, after such an effusive declaration of friendship on Nye’s behalf, prompted them to sell or give away this book that is now mine. Did the friendship simply fail to blossom? Where they just indifferent to her poems? Did they all have a falling out? And just who are Pinar and Memet anyway, and what was it they did that made them shine?

Then, as I prepare to soak the cauliflower, I remember Naomi Shihab Nye’s wonderful prose poem ‘My Perfect Stranger’. (It makes me laugh out loud and then cry each time I read it.) Her perfect stranger is a five-year old who ends up in the seat in front of her. already a poet and artist. She wears a lacy white party dress, has a little tuft of pink hair, and her fluting voice. The clear, unselfconscious voice that Nye fears might announce their shared identity as Arabs, sitting on an American flight to San Francisco, to all and sundry. So, she doesn’t share the knowledge of their common identity with the child. And, at that point in my wondering about Pinar and Memet, my speculations suddenly become edged with fear for them.

How easy it is for me to idly imagine the disposal of a book in terms familiar to me. A friendship that faltered and withered. or perhaps simply failed to blossom in the first place; an indifferent to someone’s work, or a falling out. But, of course, there are many other, externally imposed, reasons why Pinar and Memet might have had to let the book go. After all, I know quite enough about the difficulties of simply moving one’s family to a new house. (Last time we did that I felt obliged to cull my library by about a third.) How much worse, then, to be faced by exile then, to be forced to ‘travel light’, to leave valued friends and possessions behind simply because you have no other option?

Of course, I still know nothing about Pinar and Memet, beyond the simple fact that Nye saw them as new friends, as people she respected and whose company gave her pleasure, who shined. Yet at this point it seems hard not to care about, even fear for, these two strangers who mattered to a poet whose work I admire.