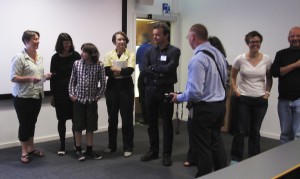 In the essay that gives me the second half of my title, Audre Lorde asks: “what does it mean when the tools of a racist patriarchy are used to examine the fruits of that same patriarchy”? Later she also states: “survival is not an academic skill”. I need to return to these and other of Lorde’s observations because they help me ponder concerns that press in on me at present, following a wonderful period of new experience and exchange in Dundee. And of course the crux of the matter that troubles me is captured in this observation: “… the master’s tools will never dismantle the master’s house. They may allow us temporarily to beat him at his own game, but they will never enable us to bring about genuine change”.

As so often when I get back from a powerful event shared with old friends and with exciting new contacts, I find myself pondering my own multiple connections and my ‘work’ (not primarily in the economic sense, but that other business of engaging with the mesh of connectivities we call ‘the world’). This questioning also relates to the Transgression film I’m doing with Antony Lyons, admittedly mostly through field trips, conversations and emails to date. This questioning has now been amplified further by reading the draft of an essay by the New Zealand/Irish artist Cathy Fitzgerald (in which she quotes some of my thoughts about ‘raw beauty’ published on this site). Cathy and I have just met up with each other again at Invisible Scotland in Dundee, a truly wonderful event – half academic conference, half locally led ‘walk-about’ – put together by the incomparable Mary Modeen. Cathy’s essay, which I found generated more serious food for thought, will appear later on her blog: beyond ecocide toward deep sustainability: stories from a small Irish forest.

Two things impressed themselves on me in Dundee which relate to all this. The first is that there is now a whole emergent ‘younger’ generation of people in dialogue with the PLaCE International / Mapping Spectral Traces network nexus. This includes graduate and doctoral students, ‘young’ and ‘established’ artists, and interdisciplinary folk of various persuasions more than able and willing to contribute to the development of the networks’ concerns. But, as the Dakota activist Mona Smith reminded us during the co-ordinators’ meeting afterwards, there is less dialogue with, and inclusion of, the ‘local’ people with the greatest knowledge of the places with which we are concerned than there should be. I will return to this later.

The second thing that impressed me is that there is now much more open disagreement – ‘dissensus’ if you like – between members of the core group than there used to be. This seems to me a very positive situation for a number of reasons. When we first got together as a group, it was very much for mutual support in what was then – for academics with our concerns and orientations – a disinterested and often openly hostile environment. That has changed, at least in some of the places we work in, as issues of interdisciplinarity and ecology have become more visible. (The old problems have, however, often simply taken new forms – not least in imposing impossibly heavy workloads on people already doing more than their fair share of work for the institution). What has changed fundamentally is our ability to articulate our collective confidence in what we do and, alongside that, our greater willingness to debate our differences rather than stress our commonalities.

One of those differences is, I think, very much to do with how we each understand ‘community’, an understanding that is inevitably closely bound up with our particular contexts – physical and otherwise – our aspirations and inheritances. Community as part of lived experience is, for example for Mona and myself, inevitably something very different. My personal concern is how, as disparate people with shared concerns, we now negotiate our differences in this respect. This is, at least for me, an intensely practical question to do with how time and energy are used.

Which brings me to the issue of transgression. Antony and I originally thought of this in geological terms – environmental events during which the sea rises in relation to the land so that the shoreline shifts upwards, covering more ground and resulting in flooding. This issue of land lost to the sea is clearly one of the major impacts on human habitation resulting from climate change. However, because of discussions and a particular shared experience of ‘silver bullet’ thinking being used to dismiss Antony’s suggestion that we need to focus more on preparing to undertake major adaptions to every aspect of our way of life and less on ways to preserve the status quo, ‘transgression’ has now become the centre of a whole mesh of linked understandings and concerns.

An unnerving part of all this is the privilege that derives from our investment in professionalism – artistic or otherwise – and in academic knowledge. What indeed does it mean today when the tools of a global economy run by a racist patriarchy – not least among which are the professional worlds of culture and the university – are still used to examine the fruits of that same patriarchy? And if it remains the case, as I think we know in our hearts, that “the master’s tools will never dismantle the master’s house” and, indeed, more and more rarely “allow us temporarily to beat him at his own game”, then what are we going to do? If those tools – of disciplinary academic knowledge and state-sanctioned and funded ‘transgressive’ art, for example – “will never enable us to bring about genuine change”, surely we need to think carefully about how we use these tools and whether it is perhaps time to forge some new ones of our own? While I accept that we may need to use our privileged access to the master’s forge and workshop to do so, we need to be very clear that we really cannot have our cake and eat it.

As I have now argued both in recent texts and at public events on a couple of occasions recently, it seems to me that we (those of us who have the privilege of working as artists and academics) have to give something up in order to contribute to trying to dismantle the master’s house, to make the space necessary for real change to come about. This ‘something’ is, I think, the engrained attitude of ‘possessive individualism’ that dominates and determines the reality of the art world and the academy. Until we address this the matters that are central to Guattari’s third ecology – that of those constellations we call the ‘self’ – will remain an intractable problem that undermines our efforts at the social and environmental levels.

And this returns me to something Joseph Beuys said to me shortly before I graduated as an art student. “Always remember, education is more important than art”. But not, perhaps,education as managed by the university as it now manifests itself?