(This talk was given at a LAND2 symposium at Plymouth College of Art on 25.01.14. It gives a snap-shot of what I’m currently thinking, which is increasingly focused on the relationship between ‘neo-animism’ and the traces of a polytheistic world view in traditional vernacular cultural artefacts).

I want to indicate a possible notion of drawing in relation to Felix Guattari’s ‘ecosophy’ and Tim Ingold’s neo-animism, understood as “a way of being that is alive and open to a world in continuous birth”; one in which “beings do not propel themselves across a ready-made world but rather issue forth through a world-in-formation, along the lines of their relationships”.  I’ll begin by introducing three slides. I’ll then briefly discuss some ideas relating to drawing and place. I’ll then return to some images. 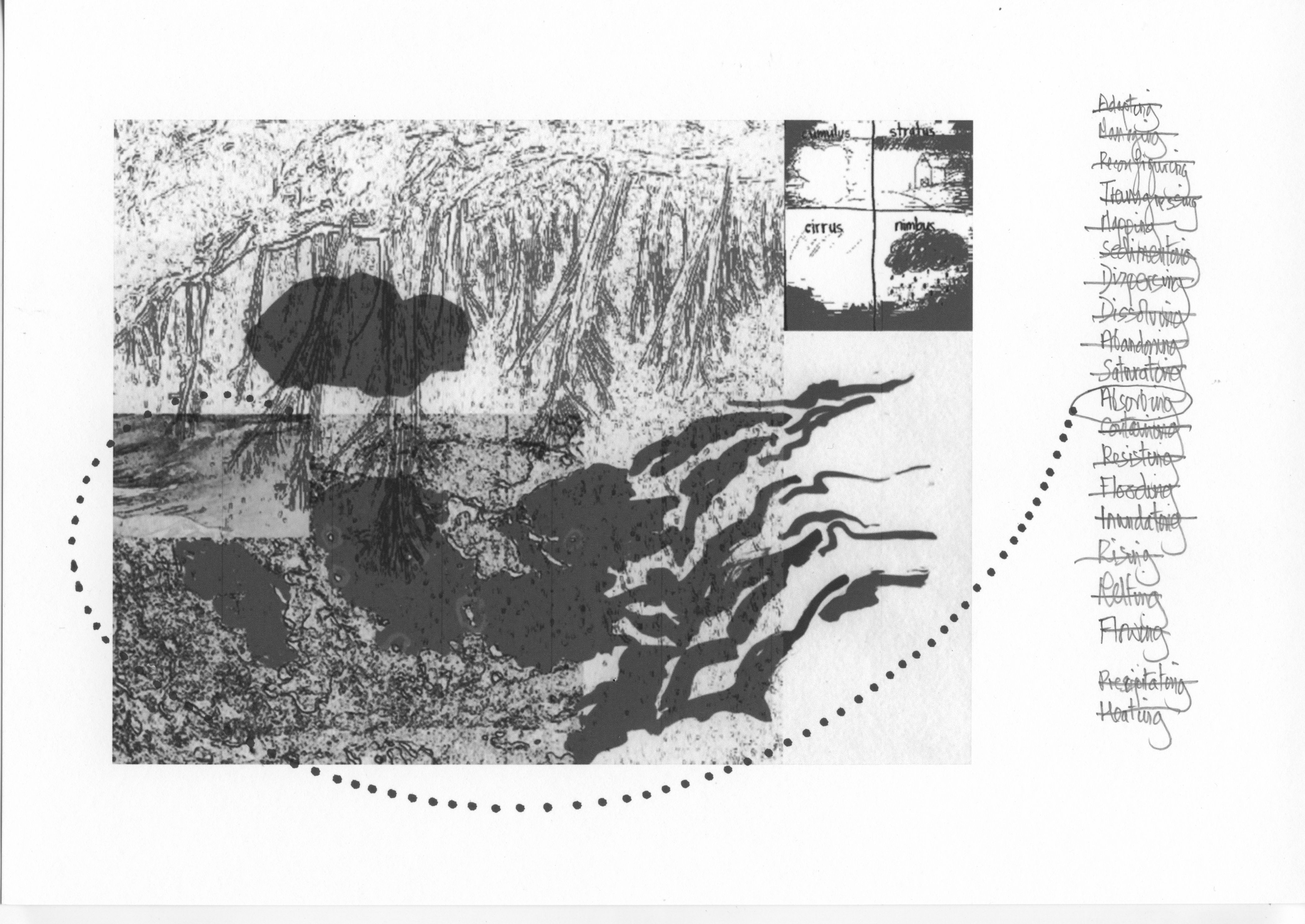 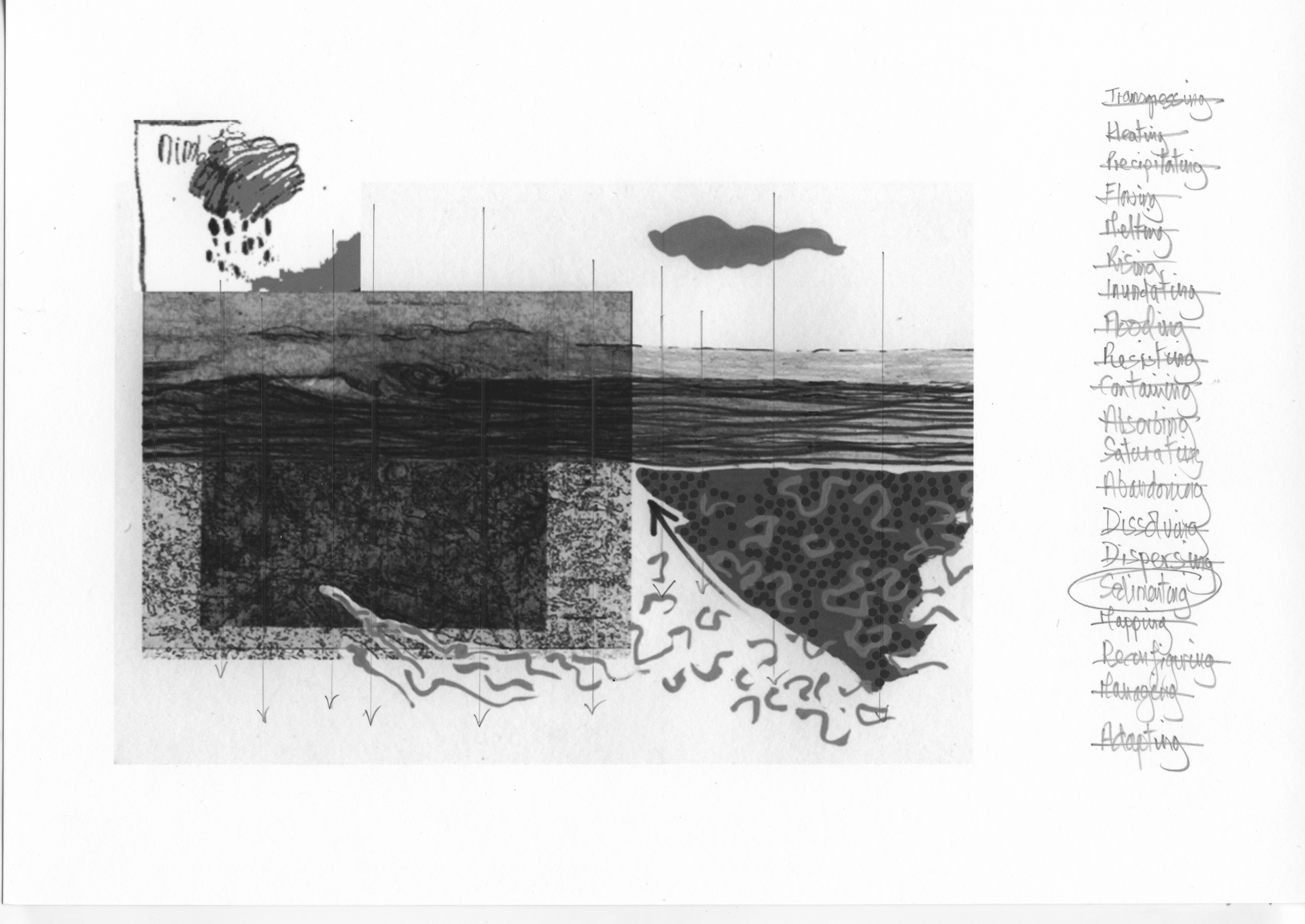 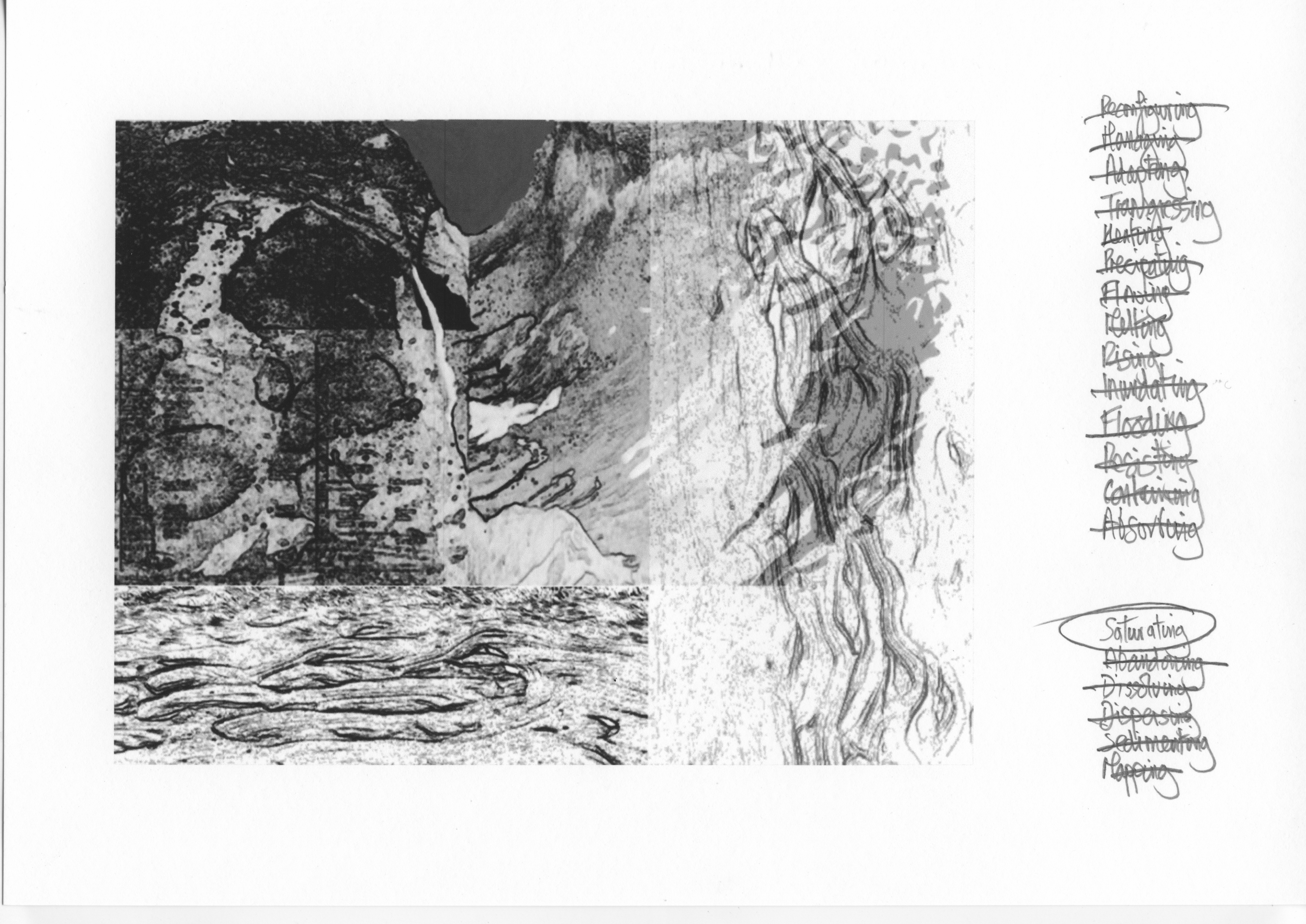 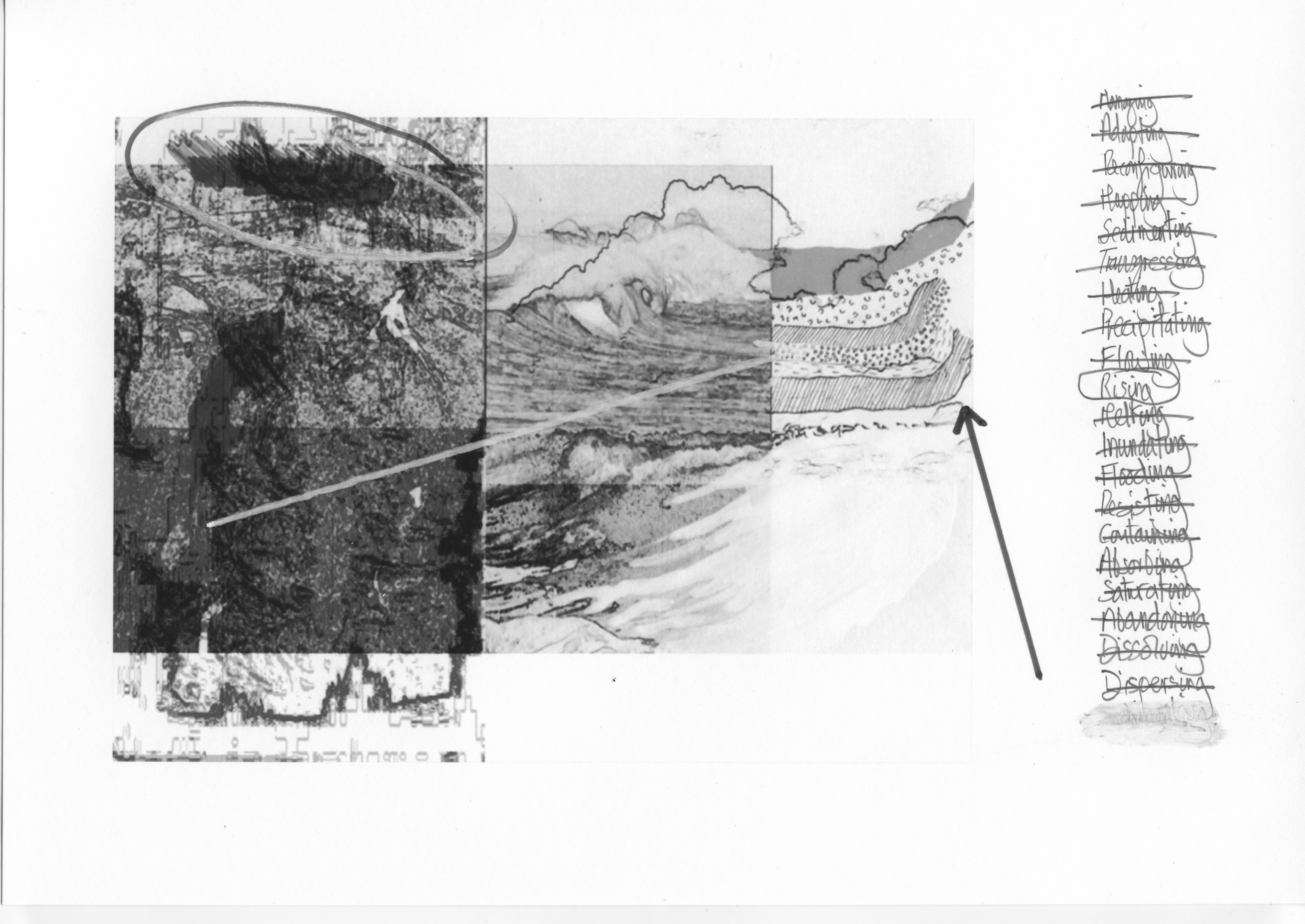 These are four digitally processed drawings from twenty made for a film by Antony Lyons and myself. It’s called Transgression: rising waters. Each drawing started with digitally scanned ‘found’ material that was then overworked autographically. The process was cumulative, with each image re-scanned and reworked to get a particular density. In some respects this mimics the geological process of transgression – that is to the way in which rises in sea level deposit sequences of sedimentary marine strata over terrestrial strata. The film deals with transgression in the context of climate change and I drew on visits to the cliffs at Aust on the Severn estuary, geological evidence of a desert that was later inundated by rising seawater.

Terra Infirma: all grass is flesh (with and for Anna Biggs) 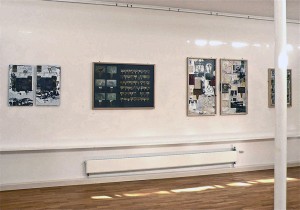 This is an installation made for an exhibition called Drawing Permanence and Place that toured in Wales, Holland and Germany. It maps my daughter’s life world and was made with her help. Because she’s suffered from chronic ME for over twenty years, her physical environment is restricted to two small but intensely known places. However this physical restriction is constantly challenged by her deep curiosity about all manner of concerns. A poetic drawing together of this constellation of interests provided the starting-point for the work.

This is a short extract from a video of an improvised workshop run by Ron Grimes, a professor of Ritual Studies. Ron asked us to enact a burial ritual with an absolute minimum of speech. For me this raised questions about what, if anything, distinguishes an improvised ritual that maps an emotional geography in time from, say, the later actions of Alan Kaprow.

Sacha Kagan, drawing on both Merleau-Ponty and David Abram, insists that we need to reclaim: “the animistic and synesthetic character of human perception”. This view, which I share, challenges conventional notions of drawing. If perception is understood for an animist perspective, we need a more inclusive and dynamic understanding of what it might be, particularly in relation to place.

This understanding is implicit in Edward S Casey’s insistence that “a place, despite its frequently settled appearance is an essay in experimental living within a changing culture”. This is differently inflected by Doreen Massey’s notion of space as: “a simultaneity of stories-so-far”, in that we are then implicated, or indeed immersed, in place-making as a complex on-going process involving narrating both human and non-human processes.

The issue of strata or levels of activity in all this is indicated by Tim Ingold’s notion of land as meshscape; as a “polyrhythmic composition of processes whose pulse varies from the erratic flutter of leaves to the measured drift and clash of tectonic plates” …. “a tangle of interlaced trails, continually ravelling here and unravelling there”. This reinforces Massey’s emphasis on simultaneity and extends the dynamic complexity implicit in Casey’s statement.

This sense of dynamic, multi-dimensional patterning brings me to Felix Guattari’s notion of ecosophy – which articulates a relationship between the environment, society, and the particular constellations of persona that make up our selves. Ecosophy is poly-ideational in that it recognizes that these layers or levels need to be understood as both particular systemic entities in themselves and as interdependent elements within a larger polyverse. Ecosophy is a radical departure from the presuppositions of scientism, capitalist economics, analytic reductivism, and the monotheistic religions. That is it challenges the presumption that all change can be made accountable to a single ideation, whether it’s scientific mono-naturalism, the profit motive, hyper-rationality, or the Divine Will. It’s Guattari’s ecosophical animism that allows Matthew Fuller to discuss forms of creative praxis that are “no longer only art” in that their “methods are recapitulated” and now “ooze out and become feral in combination with other forms of life”.

All this reinforces Anselm Franke’s claim – made in his introduction to the special edition of e-flux journal on animism in 2012 – that: “a ghost is haunting modernism – the ghost of animism”. And a re-emergence of animism requires a reconsideration both of drawing as a practice and of its history since Kandinsky’s encounter with shamanism in 1889. Animism left it’s unacknowledged trace in work by Kandinsky, Picasso, Miro, Braque, O’Keefe and Beuys, and more recently by Judy Dater, Elizabeth Ogilvie, Ken Kiff, Eileen Lawrence, Andrzej Jackowski and Glen Onwin – to name only a few. So how might we reorient our sense of drawing to acknowledge what modernist art history has repressed? To answer my own question I‘ll return to my three earlier examples.

I can’t show you how these drawings function in Transgression because there’s no final edit. However, I can tell you that the camera treats them as ‘raw material’, dissolves them as discrete entities by making each permeable to the next. It moves between images and details of images so that we never see the drawings as self contained, boundaried objects, only as evocations of an estuary in which mud and water flow endlessly in various permutations, dissolves, and tidal rhythms past rocks formed in ancient deserts. In short, the film itself draws with this material so as to suggest some of the constituent forces of a watery coastal meshscape in Ingold’s sense – an evocation that is then intercut with and bled into other, different yet related, evocations. Which is simply to say that they take their place in a wider polyverse.

I see Terra Incognita as a ‘drawing’, although not in any conventional sense. The term ‘drawing’ becomes accurate, however, if to draw is taken as an inclusive verb that always awaits a further dynamic; as indicating a relational cutting across of discrete categories – as transversal, to use Guattari’s term. To engage in drawing as a verb from an animist perspective is to place oneself in a dynamic relationship: as in the ‘drawing up or down’ of material to the centre or the peripheries of space and the senses; or in the ‘drawing out’ of meanings or resonances otherwise too compressed or ephemeral to register; in the ‘drawing together’ of apparently disparate elements into a particular constellation; or as in a ‘drawing through’ or ‘drawing out’ of a thread of intuition, argument, analysis and so on.

Drawing in this expanded sense – as an act animating particular, multiple, forms of relationality – is the base-line activity of the dynamic compound entity that constellates my daughter’s life – which is unexpectedly rich despite the severe limitations imposed by her illness. Obviously in the context of relating to place and being placed, an expended sense of drawing gives us a better understanding of the complex reciprocities that, ecologically, socially, and psychically, animate and orient our lives. Reciprocities that, when properly recognized, require that we remain open to the dynamic meshes of ravelling and unravelling in which we are each particular locations and instances.

Finally, acknowledging the animist haunting of modernism restores the possibility of a more honest and open relationship between artful drawings – in, -out, -up, -down, -together, -apart, etc. – and ritual. Ron Grimes has demonstrated, through both critique and practice, that rites and rituals need not be normative, conservative, and mono-ideational. They can be understood instead as experimental essays in Casey’s sense. In Rite Out of Place: Ritual, Media and the Arts, and writing in the context of ecological crisis, he notes that: the urgent task is not in deciding which is deepest – spirituality or politics, religion or theatre – but instead learning how to nurture an attitude of interconnectedness that reconnects us to planetary life. And in the terms I’ve suggested here, this means attending to our being drawn into the matter of the world, placed by all the forces at play there; drawn out of ourselves into new meanings or as a resource in larger assemblages; drawn together into new constellations, despite and with our differences; or drawn into otherness as a result of following threads of intuition, argument, analysis, and so on. And all these events should, in turn, inform our expanded acts of drawing.