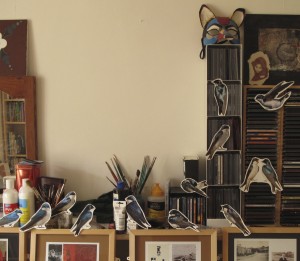 In an earlier draft of the paper that forms the first part of this essay I tried to suggest that multi-constituency collaboration rarely happens because, as professional people we’re embarrassed by the self as polyverse. This is an extension of our professional discomfort with what Bakhtin calls “matters having to do with ourselves”. The majority of professional people prefer, when asked to identify themselves, to do so in terms of some autonomous cultural domain or professional discipline as an exclusive ‘world-unto-itself’.

I tried to illustrate this point by using the example of the multidimensionality of my anticipated response on coming back to the windswept northern island of Lindisfarne. I have visited it a number of times in the past, but always on family holidays. My point, obvious enough as soon as we consider it, would have been that my responses on this visit, despite my reasons for returning being ‘professional’, would not be limited by professional frames of reference – that other memories, sensations, etc. would have been peripherally present. But this example turned out to be too ponderous and long-winded and I abandoned it.

What remains from that earlier draft is a sense of the richly paradoxical, polyvocal, particular, personal, senses of the North I’d wanted to evoke – senses in which both the sensation and an cultural understanding of the north wind – derived from the extraordinary psychosocial palimpsest that is the old Supernatural ballad of Tam Lin – are always, somehow, implicit. In that ballad the north wind is the almost imperceptible hinge on which the entire narrative finally turns. This moment is described as follows:

As it fell out upon a day,

A-hunting I did ride;

There came a wind out of the north

And woe it did betide.

And drowsy, drowsy as I was,

The sleep upon me fell;

The Queen of Fairies she was there,

And took me to herself.

I have for many years had a sense of over-identification with the ‘world-unto-itself’ of hyper-professionalism, and the institutionalised forms of power we believe this to grant us, as a seductive and dangerous form of enchantment. In no small part because in my own life I’ve been constantly called to remember the price that Tam Lin would have paid for his being enchanted had Janet not woken him from it and lovingly returned him to the human lifeworld – with all the joys, trials, and tribulations that make up the lives of ordinary (lay) mortals. What I want to do here is follow the intuitive meanings that this moment in the ballad carries for me into a discussion of the issue of the North and North-ness raised during the conference.

Tim Ingold’s opening plenary – The North is everywhere – offered an imaginal, psychosocial reading of the four cardinal points as historical orientations. My notes record – and I cannot begin to do justice to the detail of his exposition – that the West is equated with modernity, with the dualistic view ‘nature versus culture’, and with ‘history of’. The East he identifies with ‘history about’ (the other), a looking-glass history of rising and falling empires. The South is identified in turn with ‘once colonized, oppressed peoples’, with non-histories or ‘people without histories, with ‘histories against’. By contrast, the North is seen as the location of ‘history from’, of ‘inhabitation’ growing from the land and with ‘lives woven into the land’, as inclusive of all beings – human and otherwise – and as ‘anti-isms’ (his examples being example Shamanism and Animism). It is to be taken as the site of circulations of vital force and revitalization, of environment as the world we inhabit grounded in a zone of interpretation where objects are illusory, merely a reification of an unfinished continuum made up of the dynamic flow of materials. In this view of the North history as a preoccupation with the ‘first time’, the novel, does not take precedence over time as repetition. But above all this north is all pervasive, indigenous, the ‘everywhere’ of inhabitation and inhabitants.

The exposition of this position was accompanied by drawings and delivered in a persuasive rhetoric that managed simultaneously to evoke the authority of philosophers and a ‘common sense’ flowing from the phenomenology of the everyday. But, as someone alerted by A. David Napier to the distinction between monotheism and polytheism as modes of thinking, and also long attuned to the ‘polytheistic’, archetypal post-Jungian thinking of James Hillman, all this troubled me.

In the question time afterwards I asked Tim Ingold whether his clear championing of the North as a position was perhaps somewhat at odds with his articulation of the world as mesh, of mycelial ravellings and unravellings, with its implication of multiple dynamic forces and perspectives. His answer suggested that, while he felt the need to acknowledge the dynamics of each of the four cardinal locations, he preferred and was committed to the North. This can be taken at face value as a personal preference, to which he is obviously entirely entitled. However, from the perspective of lifeworld as polyverse integral to the first half of this essay, it can also be taken as indicative of a problematic contradiction in Tim Ingold’s thinking – namely, that it remains, in the last analysis, animated by the same commitment to mono-ideational positions that has given rise to the modernity from which he so clearly wishes to distance himself; the same radical, secular, mono-ideational thinking that the Enlightenment inherited directly from the monotheistic theologies of the Religions of the Book.

At first I suspected that my sense of this contradiction might be as much the result of a projection of my own preoccupations as it was a possible issue inherent in Ingold’s own position. However, listening to David Martin-Jones insightful articulation of an alternative position, in which a rhizomatic South emerged as the prime location of dynamism, suggested that there might be more to my sense of an inherent contradiction than simple personal prejudice. This sense that my concerns were shared was further reinforced by a paper from Chris Dorset, with its celebration of Paul Wheatley’s 1971 work, The Pivot of the Four Quarters. I heard this as an evocation of a Dionysian, catholic (in the secular sense) South, as the counterpoint to an Apollonian, even Calvinist, North. Owain Jones’ reminder of Latour’s association of modernity with purification (a prime cause of distinction within a hierarchy of positions), and his reluctance to partly qualify the anti-modernism he shares with Tim Ingold, seemed to chime with the way in which Lisa Taylor’s informants read David Hockney. They tend to do so as confirming their own affective responses, a process that also, inadvertently, allows them to bracket out the problematic cultural and political readings that his work can also open up. (I share many of the objections to modernity articulated by both Tim and Swain but, having twice had my life saved by surgery – and so am alive only because of its technical advances – I am always mindful of it’s benefits. Additionally, and on the basis of pre-modern mortality rates and educational opportunity, my guess is that only one in ten of us would have been present at the conference had pre-modern conditions pertained). But it was a paper by Leanne Philpot – Narratives of the Transatlantic Slave trade in North West England: Museums, heritage and dockland tourism, with its insistence on the validity of blending multiple, sometimes antagonistic narratives – each a trace of a particular historical lifeworld with continuing reverberations – that was most helpful to my thinking all this into a more coherent weave.

Owain Jones had reminded us of the importance of Felix Guattari’s Three Ecologies. Each of these, as I now understand it, must be understood as the site of an interplay, of a dynamic raveling and unraveling of psychic, social and environmental energies associated with, tensioned between, and departing from, that ecology’s own, particular, cardinal points. Tim Ingold’s monolithic – as I see it – privileging of a ‘good’ North over the other cardinal points (in particular a ‘bad’ West) is, in this context, ultimately unhelpful – although, as Owain Jones’ paper made all too clear, entirely understandable given the state of the world today. What I think Tim Ingold forgot is the simple fact that all such imaginal readings are dangerously reductive when they fail to take into account that, as an analytical psychoanalyst might put it, any too close an identification with one archetypal position becomes a form of blinding enchantment, one that in turn evokes opposite and negative forces. Any call to take up a Northern perspective that neglects to attend to this risks becoming a rhetorical enchantment and, in the process, an inadvertent evocation of the mono-ideation framing that has governed the West for far too long, resulting in all the problems identified by Owain Jones and others.

Janet can only return Tim Lin to the lay world against the power of the enchantment the Dame of the Fine Green Kirtle (the Queen of Elphame), puts in place when the north wind blows by hanging on to him, sticking with him through all his multiple changes of material, category, and implicit dynamic or direction. By being the still, present, pivot around which he can swing.

So I want to suggest that, while the imaginal North may indeed be everywhere, so are each of the other imaginal cardinal points. Each, like any imaginal image, is multiple, paradoxical, and irreducible to a single perspective. To identify a ‘good’ North over against a ‘bad’ West – as I take Tim Ingold to have done – is to reify the North, and to invite the return of all those ‘bad’, ‘repressed’, elements that are also integral to its power as an orienting image.

So in the final analysis I’m not too comfortable with this way of thinking. My sense is that each cardinal point has its light and shadow and that our task is to attend at and from the pivot, the act of attending that allows us to orient ourselves by each of them as necessary and appropriate, but without identifying with any particular one. To acknowledge the unending ebb and flow of the lifeworld as polyverse in which each of us, uniquely attentive, is a pivot and, at one and the same time, utterly peripheral – just one small dynamic constellation among innumerable other constellations.