I began writing this text a while back, sitting in the waiting area of the peedie* airport that, if you have to fly, gets you to and from Orkney. This was shortly after the mid-summer solstice this year, although there were still primroses nestling in sheltered areas along the tops of the cliffs. Waiting that morning, and thinking back over the conversations I’d had there, Orkney appeared as a dynamic and increasingly volatile crossroads, one balanced precariously in space and time. A highly charged place where distinctive narrative threads – some that seem as old as the Neolithic complex at the Ness of Brodgar, others that are as new as the cutting-edge wave and tidal technology developed by EMEC – have all become entangled there, ravelling and unravelling on their way into an uncertain future I fear but cannot predict. 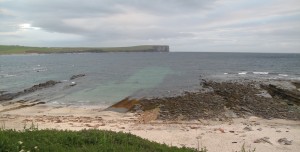 Sitting diagonally across from me that morning was a family of five. Proud grandparents, parents and, the focus of all their attention, a stout baby with an unruly tuft of jet-black hair. The child’s father appeared to be an Orcadian, but mother and grandparents were of Far Eastern origin, Japanese or Korean perhaps, or maybe even Chinese. (The parents spoke no English and the mother had to translate for them whenever they spoke to their grandchild’s father). Beyond them, and in stark contrast to the inclusiveness of this family, three men were operating an invisible but highly effective exclusion zone sitting around, and completely dwarfed, a small table. They forming a rugged, rather forbidding mass around which local people and tourists, some of whom I recognised from having visited St Magnus Cathedral and the Ring of Brodgar the previous day, ebbed and flowed at a respectful distance. The men’s physical bulk, their gestures, clothes, even their facial hair, appeared designed to signal that they were persons apart and more at home engaged in their particular specialist activities in the Great Outdoors. While there was a clear nod to American ‘redneck’ culture in their style and demeanour, they were very probably well-paid experts, either working with wave generators in the alternative energy sector or something to do with oil. (Their occasional busts of macho laughter suggested the second because, days before I had arrived, the Government had announced cut backs on support for alternative energy, and workers in that area on Orkney had already been laid off). 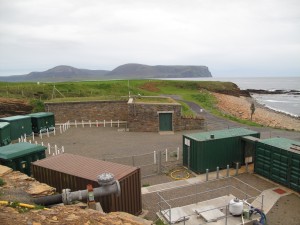 Just behind me, and in sharp contrast to this self-consciously macho group, a loose assortment of people of all ages started to assemble for the flight to Papa Westray and North Ronaldsay. At the heart of this gathering was a small, talkative girl of perhaps seven or eight, flying off on her own to visit relatives. Earlier, she had been sitting waiting with her father and another, quieter girl her own age, where she had been the focus of a series of almost continuous if brief exchanges with passers-by (including one of her former teachers) all, it seemed to me, members of her richly inflected, well populated, world. 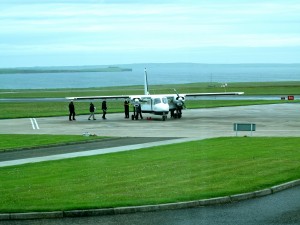 In these and various other juxtapositions as they occurred in that busy anti-room, I sensed the world of an island-as-extended-village intersecting, on equal terms, with the global ebb and flow of those who, like myself, spend more and more time inhabiting spaces in-between. This was really no surprise. The islands of Orkney, like so many seemingly ‘isolated’ locations, are of course intimately bound into a web of connectivity that links them to innumerable near and distant places. Bound by a wealth of strands – familial bloodlines, a wide range of economic activity, a rich and varied fund of cultural narratives and traditions, and a vast, if often unacknowledged, wealth of material traces mundane and exotic. (One example of the later is a store of exotic stone brought to the island from Canada as ships’ ballast. One stone from this, cut and polished, produced the centrepiece for an unusual and beautiful necklace worn by an elderly lady to whom I had been introduced the night before). 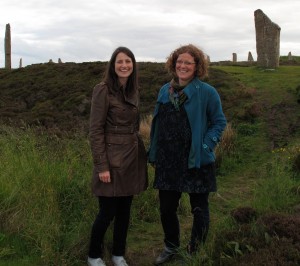 That morning flight, which would eventually return me to County Durham, marked the end of my second, all too brief, visit to Orkney. (The first had been some forty years, when my brother and I spend a couple of days trapped on the island when the boat we were sailing with had to shelter there due to a major storm). This second trip had been initiated by my friend Dr Gina Wall,  an artist and researcher who teaches Fine Art at Moray School of Art, part of the University of the Highlands and islands (UHI). We share an interest in uncanny places, curriculum development in the arts in predominantly rural regions, and the pleasures and challenges of practice-led doctoral supervision. (We are also both members of PLaCE International). My visit made it possible to meet and talk with Gina and two of her colleagues – Anne Bevan – a native Orcadian who for many years taught at Edinburgh School of Art but is now Curriculum Leader for Art & Design at Orkney College, UHI, and Professor Jane Downes – who is the Head of Orkney College Archaeology Department and director of Orkney Research Centre for Archaeology (ORCA). 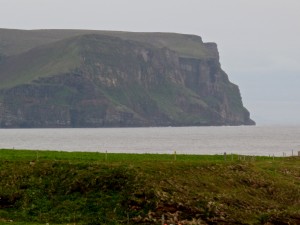 Jane is centrally involved in various archaeological projects on Orkney: for example at Mine Howe, Knowes of Trotty, and the Ring of Brodgar World Heritage Site. We quickly discovered that the four of us share a common interest in inter- and extra- disciplinary work between and beyond the disciplines of art and science and our discussions included how we might build on productive existing working links between the Archeology Department, the UHI research group Between Places, to which both Gina and Anne belong, and the communities at UHI was set up to serve. Communities that have a rich culture of their own, specific educational needs, and a range of concerns that, in this time of environmental change, deserve to be better represented within wider debates nationally and internationally. 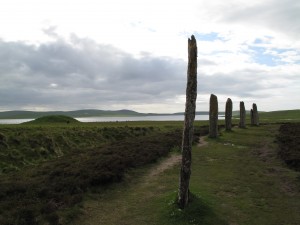 When I walked out to the small plane that would take me back to Edinburgh, the wind smelled of grass newly cut for silage. Normally I’d revel in that scent, a powerful reminder of family summers in the North Pennines. But that morning the smell was freighted with a very real trace of local anxiety. The year on Orkney had been unusually and persistently wet, so that cutting grass for silage had been delayed. This delay had forced farmers to sell off animals they could no longer feed, a situation fraught with serious economic consequences. On Orkney climate change is not an academic topic but one that generates immediate and growing concern.

Anne Bevan had been a thoughtful informant on this and many other issues relating to Orcadian life. Although she had only returned to live on Orkney some two years ago, it was clear that she was now once again very much a part of the community in which she had grown up as a child. When I met her she had just been involved in the music festival, happily undertaken in addition to juggling her various College responsibilities with setting up a croft with her partner. This new enterprise had already resulted in her planting trees with neighbours and, when we meet, she was concerned that the hens she has just been given might not be settling in as well as she would wish. That she was so clearly at ease with living in a polyverse may in part account for the richness and diversity of the exhibition of final year work produced by her students. Work that betrayed no hint of the anxiety to conform to spurious notions of cosmopolitanism that so often haunts undergraduate art students pandering to tutors’ misplaced notions of what constitutes ‘professionalism’. 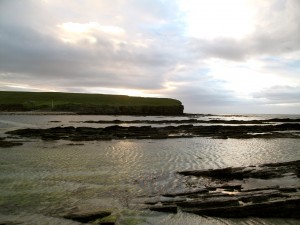 On the journey north to Orkney I had started to read George Lakoff’s The Political Mind: A Cognitive Scientist’s Guide To Your Brain And Its Politics. As a European I find the book’s hectoring tone and somewhat reductive approach – it is exclusively focused on a particular popularist notion of ‘progressive’ American democracy – rather irritating, but it has much to say that is both important and very sobering. The convergence of Gina and Anne’s educational concerns with Lakoff’s insights, when taken against the background of having recently read Geoffrey Parker’s Global Crisis: War, Climate Change & Catastrophe In The Seventeenth Century, are uncomfortably thought-provoking. The overwhelming majority of responses to the problems caused or exacerbated by the Seventeenth Century’s Little Ice Age serve to demonstrate the appalling consequences of the unfettered application of what Lakoff refers to as the narrative of ‘the strict father’ (as authoritarian as it is rigidly hierarchical), as opposed to that he associates with the ‘nurturing parent’. 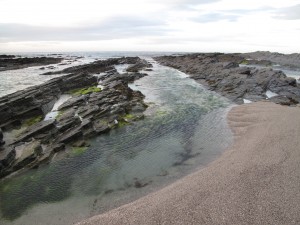 A paraphrase of one of Lakoff’s observations on authority will serve here to illustrate why. He argues that the conservative notion of authority (modeled on the figure of the strict, authoritarian father beloved of US white Anglo-Saxon Protestant mythology) is such that it is a natural ‘given’ and so must simply be unquestioningly obeyed. (p. 186) It has no truck with the alternative view: that authority and respect need to be earned, requiring an individual or institution to demonstrate real and active empathy and responsibility (‘the ability to respond’) towards others. This clearly requires that both institutions and individuals are open in their dealings and, as such, are able to earn the trust of those with whom they deal. Part of that openness lies in a willingness to give good reasons for decisions and actions that effect others, along with a willingness to debate and modify those decisions when necessary. All this is germane to the various (and I hope ongoing) conversations in which I became entangled on Orkney.

*A lovely Orcadian term meaning small – as in ‘the Peedie Sea’ in Kirkwall or a ‘menu for peedie people’. 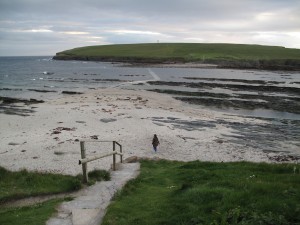 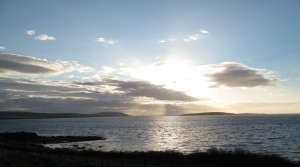