‘Erdkunde’ revisited: some thoughts on art and time | Iain Biggs 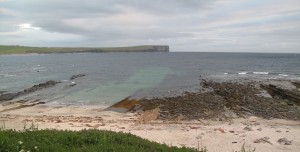 I’m re-reading Adam Nicolson’s Sea Room, a beautifully written account of his relationship to the Shiant Islands, which lie some five miles off the Isle of Lewis, and of the world in which they are enmeshed. It is one of a number of books about a specific place that seem to me to convey something of the essential concerns that underlie what, out of habit rather than conviction, I continue to refer to as deep mapping.

Yesterday I found myself speaking as a ‘representative’ of those concens as a panel member at the City Museum and Art Gallery in Bristol in a public discussion of the Museum’s Erdkunde exhibition. (I should say at once that John Wood and Paul Harrison’s work has grown on me to an unexpected degree since I referred to it in an earlier blog – their understated yet multilayered video and the surrounding material taking on a much greater richness and resonance as a result of my making an additional visit and through turning over elements of the work in memory).

Two connections with Nicolson’s book appear to me relevant to the exchanges during that panel talk and the questions from the audience that followed it. The first is the question of our experience of time, something to which we kept returning in various ways. Perhaps thinking about geology inevitably leads to thoughts of deep time and, in this case, its contrast with the sense of instantaneousness associated with so many of our new technologies. The second connection is not unconnected to this and has to do with what I can only call the politics (small p) of making worthwhile art, an activity which it may now be increasingly important to understand (given that any form of ‘Political art making’ is already captured within the dominant categories and networks of our existing culture).

In a beautiful account of gathering water from local springs close to the dwelling where he stayed on the islands, Nicolson writes (page 67) about the way in which, in the simple act of collecting water, his sense of time became no longer linear – that is part of the sweeping away of the past in the present towards the future that dominates so much of our lives. Instead his experience of time shifted, becoming what he refers to as the awareness of “a laminar flow”, one in which “different sheets of time” move at different speeds, “one over another, like the currents in the sea”. This is I suggest the same awareness of multiple, co-existing temporalities that we can move into when walking at a steady pace along a windswept rocky shore, one where the seemingly frozen geological movement of folded cliff strata and the low cliff edge blackthorns distorted by years of subjection to the constant of a prevailing wind are counterpointed by the just perceptible shift in the tide and, in another register again, the rapid passage of sea birds and the constant scudding of clouds.

The second point, what I have clumsily referred to as ‘the politics (small p) of making worthwhile art’, relates for me to what Nicolson writes about a particular form of thought. He identifies this (page 101) with the help of a phrase from Denise Levertov’s poem Overland to the Islands. There she names it as “intently haphazard”. Nicolson then draws  attention to her presenting this in the image of a dog that is always moving, notices everything, frequently changes its “pace and approach” while retaining its overall direction; the act of an animal for which “every step” is “an arrival”. This, it seems to me, is the territory in which the materialised thinking – although ‘thinking’ is perhaps the wrong word here, James Hillman’s ‘the thought of the heart’ might be closer to the mark – that we intuit through examining the products of the activity we call art. One that is able to sidestep, even to a degree counter, the all-consuming instrumentality that increasingly dominates every aspect of our waking lives. And it’s in this territory too, and perhaps for similar reasons, that the spaces appear in which we are able to apprehend time as sinuous, as not strictly linear; that “laminar flow” that allows us to experience the complexities and contradictions, the currents and counter currents, that carry the present out of the past.

It was in this context that it dawned on me, reading a review of Massimo Bacigalupo’s Ezra Pound: Posthumous Cantos, that Pound’s magnus opus too might be thought of as related to the impulses that underlie the deep mapping project. A somewhat sobering thought that perhaps leads to difficult questions about the relation between the desire of inclusiveness (or should that be the fear of not being in control) and a certain brand of politics? However, it appears that these last, posthumous, Cantos tell a somewhat different story and one that, I must admit, I now want to hear.

Although not planned that way, I now realise that my re-reading Sea Room has turned out to be an unconscious act of preparation for one of my periodic periods of self-immersion in some aspect of Scottish culture. I’ve just bought a second hand copy of Lewis Grassic Gibbon’s A Scots Quair, the first part of which is said to be the most single most popular book with readers in Scotland. I have resisted examine this impulse, part of my sense of an increasingly dominant in-between-ness in my life. Perhaps reading A Scots Quair will finally prompt that examination.