[These are the fourth and fifth of forty-nine narrative sections that make up Convergences: Debatable Lands Volume 3, the concluding work of my Debatable Lands deep mapping project. The complete work is now available on request as a pdf. If you would like a copy, please contact me at: iain19biggs@gmail.com]. 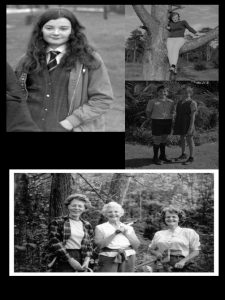 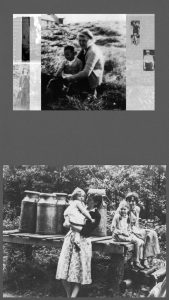 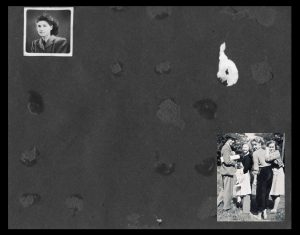 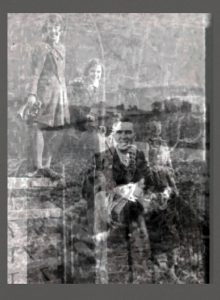 Richard had rented a cottage on the southern edge of our high moorland for several years before I discovered he was there.

When Dad and I first moved north, Richard was studying at university and often visited us in the summer. I didn’t see a lot of him then because he stayed in the old caravan in the garden, although he sometimes ate with us in the evening. But I often heard him, talking with Dad downstairs late into the night, or singing when he came in for a bath. I was rather shy of him because his occasional appearances at breakfast, still glowing from his bath and dressed only in shorts, gave me my first, somewhat bewildering, taste of the mysterious attraction of the male body. I do, however, have a very fond memory of us all playing tag out in the back garden early one morning the year we moved north. Me rushing around on the wet grass playing the fool, and the two men so bent up with laugher they’d no chance of catching me. It was the first time I remember Dad laughing properly after Mum died.

After Richard graduated we got snippets of news from Christmas cards. He got a First in Earth Sciences, did a Masters in Environmental Studies, and then a Ph.D. on something involving the Forestry Commission. He was overseas when we had Dad’s funeral and I lost touch with him after that. So, when I heard where he was living I got his number and rang him. We agreed to meet for lunch at a pub after I’d made a delivery, suggesting neutral territory in case, after all those years, we didn’t hit it off. As it turned out, we did.

He was a little late. He’d helped with a stray bullock hit by a lorry and then needed to clean up. We talked over a ploughman’s lunch and then went back at his cottage and continued over mugs of tea. We walked a big mongrel called Mike, who Richard shared with a neighbour. Then he made soup and we ate it together with bread, cheese, pickle and his own small sweet tomatoes, grown in a little ramshackle greenhouse behind the garage. We were still talking when I noticed it was almost midnight and that I needed to drive home.

Richard had worked full-time for the Forestry Commission as a ‘field scientist’ and then diversified. He studies, and occasionally culls, roe deer and acts as a consultant. He also records data for various long-term environmental projects on forestry for two different universities. The cottage is full of books, the garden of vegetables and bees that, like Mike, he shares with a neighbour because his work involves traveling. When he’s at home he also does odd jobs around the village, mostly gardening, walling and other handyman stuff. He says it’s to supplement ‘the pittance’ he gets for his work, but I suspect it’s just as much because he’s gregarious, likes to gossip, and enjoys the physical work.

Richard is tall, lean, with a weathered face and crow’s feet around his eyes. His hair is thick, cut close, flecked with grey, and starting to recede. He has powerful arms and big expressive hands – the hairs on their backs are ginger brown but go almost blond in summer – with which he gestures as he talks. His voice is no less deep, lively or edged with laughter than in my childhood memories. When he gave me a farewell kiss on the cheek he smelled slightly earthy, with a hint of wood smoke, well lived-in wool, a touch of sweat, and a hint of garlic from the soup. As I turned I felt a faint tug of desire and, for the time it took me to walk to the van, turn, and wave back to the figure in the doorway, I wondered what he would be like as a lover. A mistake. But I made a resolution to visit him when I could. 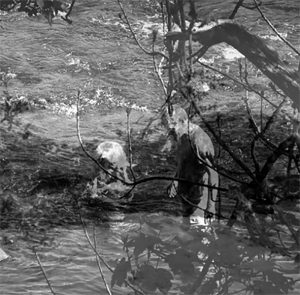 As it turns out there wasn’t that much time for visiting. I saw him twice that spring and maybe four or five times over the summer and into the autumn. In early November, a community forestry group on the Isle of Mull hired him as a consultant. He met Margaret there and sent an email announcing that they were engaged and he’d be moving to Mull. The significant bit read:

I’ve met someone called Margaret McDonald, a wonderful woman who lives here with her son Ben, a boy who sings like a lark and has given all their hens Gaelic names. (Ben’s father was drowned at sea when he was three.) Margaret is fifty per cent of the post office here. She also helps run an internet repair business for the north end of the island. A pillar of the local community in the best sense, who has helped negotiate me a part-time job here on a highlands and islands community forest initiate. Despite my advanced age, she has also graciously agreed to marry me. Wedding invitations will follow in due course and, as soon as I can sort myself out, I’ll move to Mull.

I was invited to the wedding but made my excuses. I sent them the little yew box I’d made him as next year’s Christmas present, along with a copy of an old photo of Dad with myself, aged about ten I suppose. I last saw him when he and Ben drove away with the remainder of his possessions. He had spent a week sorting out his lease, saying goodbye to friends, collecting up the last of his books, furniture and so on into his van and a horse trailer he’d borrowed from Margaret’s brother. Mike and the bees had already gone. Sarah Aitcheson helped me entertain Ben while Richard was busy. A thin, darkly beautiful boy who said little, but smiled his dazzling slow shy smile to make up for it.

Richard, Ben, Lizzy, Sarah and I squeezed around my kitchen table for supper the night before they left. We had a grand evening together and, despite my sadness, I enjoyed watching Sarah, then just turned sixteen, try out her already considerable charms on young master Ben. She was wearing her big black DMs, red tights, short sleeveless blue dress over a black tee shirt, with her long dark hair tied back and up. Very adult-looking but still also just a girl – that wonderful combination of not quite knowing what to do with her body, of ready smiles and open laughter, the odd blush, and those almost savage little surges of energy that ensure she’s never still for long. Ben, probably a year or two younger, was clearly smitten. Watching them flirt and laugh together I remembered her aunt Kate at Sarah’s age. When we said goodbye outside his cottage late in the morning the next day, I had the sinking feeling in my stomach I get now whenever someone who matters to me goes away. 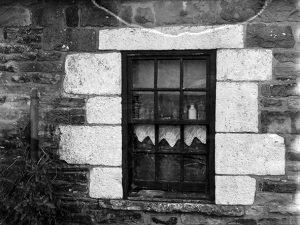 After the goodbyes, Richard started the van and, opening the window, passed me the white glazed ceramic bottle he’d kept among assorted oddments on the old pantry shelf. I’d said, the last time I called in, that it was a little white sentinel, keeping watch on the home road. As he gave it me he smiled and gave a little nod. Then he reversed the trailer around the yard and headed down the lane. Sarah, who had come to help load but spent most of her time flirting with Ben, forgot about being grown-up and jumped up and down, waved wildly, until they disappeared.

I went straight back inside to shut windows and start locking up. I needed time alone to still my heart.