One August morning in my childhood I remember sitting on the floor of my bedroom with my chin on the windowsill. A great flurry of rooks and jackdaws wheeled out over the big field behind the cottage, which had been cut for hay late into the previous evening. The field was dappled by swift shadows as a succession of small clouds blew past high above. I absorbed this unthinkingly, with the sun’s warmth, much as a cat might. The quality of these northern uplands that are, and yet are not, my home, was already settling into my marrow.

Now this is all bound up with a sense of something I can’t name but recognise as related to Don McKay’s notion of ‘wilderness’ as ‘the capacity of all things to elude the mind’s appropriations’.[1] But as soon as I write this I feel doubtful. In the past, London friends have interpreted my reluctance to talk about my northern childhood as indicative of some lack; an oblique reference to a problematic exile following the loss of my mother.

I think that’s nonsense, but ….

I suspect my not speaking about certain aspects of my childhood relates to something more complex and elusive than that loss; to my unruly love/hate relationship with the brooding and beautiful land in which I’ve lived and worked most of my life. A relationship that is also bound up with my intense dislike of a system of land ownership and management, based on a largely unacknowledged history of violence, that still determines so much about this landscape. 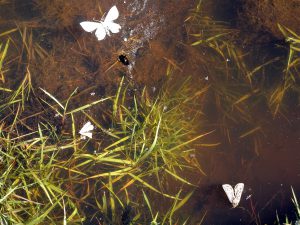 However, that child with her chin on the windowsill might, if you’d persuaded her, have admitted that her reluctance to speak about such things also had to do with her fear of glaciers. She imagined glaciers as vast implacable and deadly cows’ tongues, slowly rasping away the big salt lick of the world. She must have picked up on something Miss Richardson said at school and glaciers and ice fields haunted her imagination for years. She had nightmares about them freezing and eating everything living in the whole world. This seems so strange now, in a world of rapidly melting ice-caps, but was vividly real to her then. In that nightmare, vast sheets of rough ice came oh-so-terribly-slowly down the valley in the darkness, inexorably crushing and freezing everything in their path as they headed for our cottage. And with them came an overwhelming sense of an icy death without rest or stillness.

So perhaps Mum’s death had a part in my reticence after all.

There’s one other thing that may relate to the glacier business and my associated fear of the cold. I was a beanpole of a child who said she was hungry all the time.[2] (I’m sure now that wasn’t true.) Perhaps it was my way of protesting against being landed in this cold, wet, and windy place where I always seemed to have to find the energy to walk up yet another hill. I do remember early on enduring weeks of cold, unending, near-horizontal rain that so lashed the valley that the sheep and cattle seemed permanently huddled in the lea of whatever afforded them shelter. A rain that rattled on our roof and could even be heard over the sullen growl and rumble of the river, which normally ran so quietly some fifteen yards from our front door. So maybe it’s no wonder that the warmth and bounty of Mrs. Oliver’s Homehaugh kitchen looms so large in my memory. While it’s certainly the case that, as a child, I grew fast and did feel the cold, Miss Richardson was right when she told me that saying I was always hungry was ‘just a habit’. But, writing this now, I wonder less about the habit than the question: ‘hungry for what’?

Mum died when I was nearly seven. She and Dad were work partners too and, I believe, very happy despite problems with Mum’s foster parents. She was twenty-two and Dad thirty-one when they married secretly in a registry office the day after she graduated from the veterinary college where he taught part-time. Her wealthy parents, her adopted father the last of an old Catholic family, were appalled. Dad was a godless Scot of humble farming stock and, to add insult to injury, I came into the world three months earlier than was expected by respectable people.

I used to pretend I don’t know how Mum died so as not to have to talk about it. In fact, Aunt Claire told me what happened. Mum got an infected cut that didn’t respond properly to antibiotics. She developed a fever and then became seriously ill. After eleven weeks of inconclusive diagnoses and progressively longer periods in hospital, she died from complications resulting from a neurotropic virus. It sounds clichéd, but I think part of Dad died with her. As far as I know he never so much as went out with another woman. But then I suppose his only daughter might have been the last to know if he had.

I owe a lot to Miss Richardson, but I took her entirely for granted then. She taught me to look, listen, and think carefully about what I saw and heard. She illuminated our lessons with her knowledge and enthusiasm as a highly competent amateur naturalist and well-respected local historian. She could be stern, even frightening (she needed to be, given some of the children she taught), with a brisk matter-of-factness that almost hid her essential kindness. But whatever our various quarrels with her when we were under her charge, I never heard an adult she taught speak ill of her. 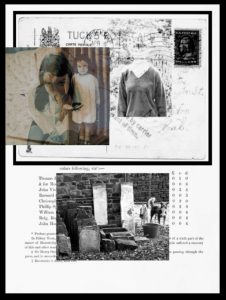 I always enjoyed her stories and, when I heard she’d died, I came up from London for the funeral. Everyone turned out to pay their respects, including lots of former pupils who’d moved away. Her funeral gave me a sense of our community here that nothing before or since has matched. It helped me decide to move back north.

[2] This once led to a strange exchange that Flora didn’t understand at the time but which stayed with her. She wrote in a letter to me that Miss Richardson had an eccentric woman friend, a regular visitor to the village, who was a folklorist from the Highlands. She would often come into the school to talk to the children and, on one such visit, overheard Flora complaining about being hungry and called her over. Flora vividly remember her saying, very seriously: ‘be careful what you say lass, or a just-halver might hear you. You don’t want one of them’. This stayed with Flora because she had absolutely no idea what the woman meant, seemed to be entirely serious, and so frightened Flora. The following passage is from Lizanne Henderson and Edward J. Cowan’s Scottish Fairy Belief (2001): “Humans who ate a lot yet never seemed to gain any weight were believed to have ‘a voracious elve’ called ‘geirt coimitheth, a joynt-eater, or just-halver, feeding on the pith and quintessence of what the man (sic) eats, and that therefore he continues lean like a hauke or heron, notwithstanding his devouring appetite” (p. 63)].