On Saturday Sept. 1stI attended a day workshop – Conserve? Restore? Rewild? Art and Eco-Poetics Rise to the Challenge, organized by Veronica Sekules, director of the GroundWork Gallery in King’s Lynn. The speakers were the poet Elizabeth-Jane Burnett, the author, nature writer and ecocritic Richard Kerridge, the poet, editor and ecocritic Jonathan Skinner, Harriet Tarlo and Judith Tucker (poet and artist respectively, who co-organized the day and were showing work at the gallery, and the eminent environmental scientist Andrew Watkinson (who has just been made an Honorary Member of the British Ecological Society).

The text of my talk is given below.

I’ll start with some background to what I want to share with you. Forgive me if some of this appears to be stating the obvious.

In 1989, Edward Sampson wrote: “there are no subjects who can be apart from the world; persons are constituted in and through their attachments, connections and relationships”. That’s to say, we exist only as entangled in multiple and dynamic ecologies. We are, in one sense, a conversationbetween those ecologies. So my starting point is this quotation from Monica Szewczyk:

‘… if, as an art, conversation is the creation of worlds, we could say that to choose to have a conversation with someone is to admit them into the field where worlds are constructed. And this ultimately runs the risk of redefining not only the ‘other’but us as well’.

Understanding conversationin this sense is helpful because, as Mary Watkins reminds us, thinking itself is ‘a mosaic of voices in conversation’. Really listening to our voices in conversations is an important aspect of how we are changed by experience. As in any real conversation, listening is primary – otherwise there’s just the din of competing monologues. Listening to that mosaic of voices is a key element in making art work because it makes a conversation possible with the attachments, connections and relationships that make up an artist’s world. It’s through such collaborative conversations– whether they’re internal or external – that artists are able to tap into the creative tensions that animate their work. 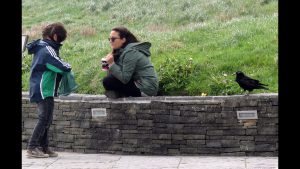 The types of conversation that animate art have been changing. We’re coming to realise that we need to listen betterand more widelyto the world at large. That we need to listen to voices marginalised or silenced by ways of thinking that set humans above and apart from the world. By a thinking that still assumes that the mind is a unified, rational system working according to logical laws or principles, where meaning is linguistic, and language exclusive to humans. This rook has language– both audible and embodied – we just haven’t learned it.

That’s the background. Now I want to link listening to wilderness, wildness, and, perhaps, re-wilding. 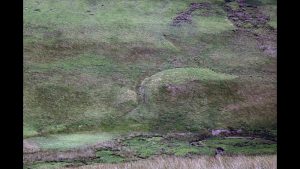 The Canadian eco-poet Don McKay writes that: “before it becomes a speaking … poetry is only a listening”. A listening, he suggests, directed to the capacity of all things to elude the mind’s appropriations. It’s the quality of wilderness in all things that makes this possible. It’s a sense of this wilderness that allows our listening-to-the-world to bypass our desire to organize everything into fixed categories and neat concepts – and then, all too often, to claim that they represent reality. Listening to the wilderness in things is vital. It keeps us open to the infinite ambiguity, paradox and complexityofthe world. That openness makes empathetic imagination possible because it reminds usthat we, and the world, are alwaysbothmore andless than the categories that name and divide us.

I’m now going to take up these thoughts in relation to two of my own works, which I see as conversations-through-making, which relate to deep mapping. 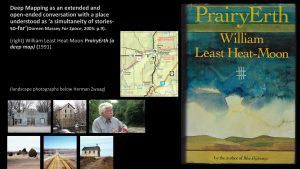 Arguably,deep mapping or wild cartography originated as an approach to writing based on the same concerns as eco-poetics. Named after William Least Heat-Moon’sPrairyErth (a deep map),it offers an extended, interwoven but open-ended, evocation of ongoing conversations in and with a particular place in all its fullness. That’s to say, it allows us to see a place as what the geographer Doreen Massey calls a ‘simultaneity of stories-so-far’, including its often unheard, ignored or suppressed eco-stories. 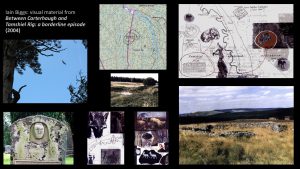 Between Carterhaugh and Tamshiel Rig: a borderline episodeis the first part of a slow deep mapping project made into a book. Based on fieldwork on the English Scottish border, it began as a conversation with two places. One was a late Bronze-age farm site called Tamshield Rig. As you can see on the slide, it’s still marked on the OS map, although it was ploughed up and overplanted by the Forestry Commission long ago. The other place, Carterhaugh, is a fictional site at the heart of the old Borders ballad Tam Lin. However, there happens to be a Carter Burn just north of Tamshiel Rig with low lying meadows, or haughs, along its banks. I spent some three years in conversation with these two place. This involved exploring the history of wolves in the UK, delving into archeological and parish archives, reading ethnographies that link roe deer to the ‘good neighbours’, finding spectral traces of a proto-feminist wisdom encoded in very old ballads, and a whole lot else besides. The resulting book entangles texts, documentary photographs, maps, and collaged images. Ultimately, it’s about finding McKay’s sense of wilderness hidden beneath the surface of the former parish of Southdean; about eluding the mentalities that govern the tourist industry, the Forestry Commission, family history enthusiasts and Regional planning authorities, and so on. 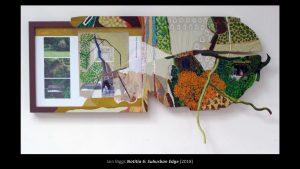 For various reasons,I can’t do this kind of deep mapping anymore.Instead I’ve been making a series of small works in a series called Notitia.They’re about noticing, listening, or paying close attention to a place as a ‘simultaneity of stories-so-far’. Each work has a framed section with at least three photographic images related to the place. The rest of the framed space is given over to my conversation with those images. Beyond the frame there’s a related, fragmentary field, with extensions suggesting paths, rivers, or lines of flight that could be followed elsewhere. Each piece tries to condense a mosaic of voices concerned with particular attachments, connections and relationships.

Staying with this idea of place as a simultaneity-of-stories-so-far,I want to share one such simultaneity from South Africa. This work – Raaswater – shares its Afrikaans name with what was once a farm. A farm where, in the 1940s and 1950s, the maternal grandmother of the painter and performer Hanien Conradie grew grapes for export. It’s where her mother grew up. The farm was named after the raging sound of the river that ran through it, the Hartebees River. As a child, Hanien was enthralled by her mother’s stories about Raaswater, imagining it as an earthy paradise. A few years back she returned with her mother to see the farm,which she herself had never visited. They found it unrecognizable – the river silent and all indigenous vegetation gone. European farming methods had so radically destabilized the water ecology that the river is now dry for much of the year.

Deeply distressed, Hanien salvaged some clay from the river – clay like her mother had played with as a child – and took it into her studio. She created an imaginal ritual that allowed the river’s water to re-sound, to run wild again, which helped her evoke a new story. That story – Spore – is about land ownership, about loss of indigenous habitat, and about the importance of mourning the intersections of personal history and environmental irresponsibility. Astory that reminds us of the importance of listening – to water as much as to people – of paying close attention to what lies beyond the human. 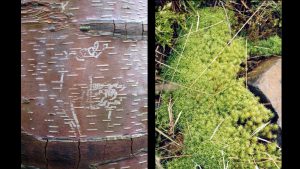 In his book, How Forests Think: Towards an Anthropology beyond the Human, Eduardo Kohn shows how the world of an Amazon tribe speaks. But we’ve largely lost the ability to listen to the stories a landscape and its people tell. Stories that acknowledge wilderness, that keep active the empathetic imagination necessary to articulate a truly ecological vision of ourattachments, connections, and relationships. We’re now suffering the psychic, social and ecological consequences of that loss. To redress that loss we need to acknowledge that listening to the larger conversation with the world is frightening. It brings with it all the uncertainties of wilderness, the need to accept the risk that this conversation with the world will redefine us in ways beyond our understanding.

In a recent interview, Seamus Heaney’s daughter Catherine suggested her father:“must have cut himself up in order to do his civic duty, his poetic duty, his family duty and everything else.” I think that’s mistaken. A poet is, in the first instance, a listener to a mosaic of voices and develops empathetic imagination by listening to the dissonances and discomforts that flow from, among other things, the tensions between what she calls: “different duties”. It’s that process that enables what Karen Barad calls our‘emerging through and as part of our entangled intra-relatedness within the universe’. From an intra-relatedness that’s always more complex, untidier, and more ambiguous than our analytical and conceptual frameworks will allow. 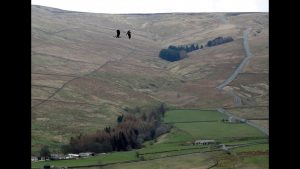 So, when we hear a pair of lapwings call in flight, do we attend to our mutual entanglement with them? One that includes creating an environment that’s steadily reduced their numbers since the mid-19thcentury. 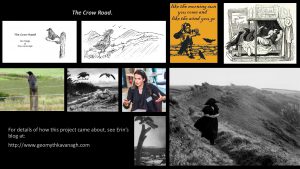 Recently, I’ve engaged more directly with the eco-poetic possibilities of deep mapping by working with Erin Kavanagh, who is also engaged in deep mapping. She works as a poet, photographer, artist, and on the edge of academia, an ensemble practice that’s focused around creating narratives that open productive spaces between science – including ecology – and myth. In addition to deep mapping we share an interest in corvids – particularly ravens, rooks and crows. Last year we put together a performance lecture – TheCrow Road– for an eco-poetics conference at Sheffield Hallam University, organized by Harriet and Judy. (We performed it again more recently at Bath Spa university). The Crow Roadis partly an extended meditation on the phrase kith and kinand partly, as Erin puts it, an attempt to “plough up outmoded ways of thinking”.

A sample of Erin Kavanagh’s drawings from The Crow Road

We use a hybrid approach – somewhere between an animated graphic novel, a poetry reading and an academic presentation – to conjure up and involve our audience in a certain sense of wilderness. One in which Erin’s crow-girl, a changeling second cousin to Ted Hughes’ Crow,goes wayfaringthrough a kaleidoscopic landscape. A landscape made up of traces of upland country, scholarship, folklore, song lyrics, theories, farming practices, and personal histories. The crow-girl’s wayfaring enables each  topic the chance to resonate with possibilities in the others. We want to shift the relationship between our audience and crows closer to one of kith and kinand, in doing so, to shift more fundamental presuppositions about how we’re related to the world. That’s to say the work is, among other things, an attempt at educational re-wilding, something I believe we badly need in our current culture.

I’d like to end by say that I think this educational re-wilding – or reattending to wilderness in Don McKay’s sense – is vital if we want to expand our ecologically empathetic imagination. I’d also suggest that this should be our first priority. It’s more important than, for example, imposing our human ideas of what species of non-human being should – or should not – be allowed back to live with us in any particular landscape.

Eduardo Kohn How Forests think: Towards an Anthropology beyond the Human University of California Press

Edward Sampson quoted by James Hillman ‘”Man is by nature a political animal” or: patient as citizen’ in SanduShamdasaniand Michael Munchow(eds) Speculations after Freud: Psychoanalysis, philosophy and cultureRoutlege.

Mary Watkins ‘Pathways between the multiplicities of the psyche and culture: the development of dialogical capacities’ in John Rowan & Mick Cooper (eds) The Plural Self SAGE

Nicholas Wroe ‘Seamus Heaney’s family on life with the great poet: ‘He was always just Dad at home’ The Guardian Sat. 30thJune 2018