[This the second of forty-nine narrative sections that make up Convergences: Debatable Lands Volume 3, the concluding work of my Debatable Lands deep mapping project. The complete work is now available on request as a pdf. If A life is several stories …’you would like a copy, please contact me at: iain19biggs@gmail.com].

‘A life is several stories, not just one:’ (in lieu of an Introduction).[1]

Looked at conventionally Flora and I lived very different lives. I earned my living teaching in colleges and universities and, when I knew Flora, was working in the south-west of England. Every year, however, I and my family spend time in County Durham. Flora lived in the Borders country to the north, where she worked as a ‘maker and mender’. This required her to travel back and forth across the Cheviot hills collecting and delivering work. So, despite our different ways of life, we became friends, largely because we shared a fascination with the physical and social worlds of the rural upland country of the north. We also shared a deep-rooted need for exchange and speculation, for conversation. As individuals uncertainly located psychologically between urban and rural worlds, we had a common sense that people’s lives rarely fit entirely into simplistic categories. These simple commonalities have largely determined the nature and form of this book.

As Flora’s editor, I’ve tried to be true to her sense that a life is best seen as several interwoven stories, each lived in distinct, if ultimately interrelated, worlds. As a mesh of stories inhabited by multiple, porous, selves; by ‘Flora’, ‘Faun’, and ‘Laura’s twin sister’, each one played out within a cat’s cradle of relationships. What follows is less an edited autobiography than a provisional mapping out of the life-long conversations that maintained Flora’s sense of kith[2], of a way of knowing these intersecting worlds.

Something need to be said about the process by which this mapping arrived on the page. I first read everything Flora sent me and, because her writing often addresses me directly, then worked through, in quasi-geographical terms, the overlap between our lives conversationally. This allowed me to envisage the ‘place-between’ we called ‘our’ Borders; a place that, although very much grounded in physical geography, is also somehow a shared identity. (So, I’ve visualized it using my own photographs in addition to those she sent me.)

You can get some physical sense of this Borders by tracing a route on an Ordinance Survey map. It falls within the area that you would enclose on the following journey. You might begin at the river Esk at Longtown, following the A6071 via Brampton and Alston to Stanhope on the A689, before turning north on the B6278 to join the A68 at Carterway Heads. You would then continue up the A68 before turning right onto the B6342 some seven miles north of Corbridge. Then you would follow the B6342 until Rothbury, where you take the B6341 until you turn left onto the A697. Then you would follow it through Wooler to the river Tweed and so into Scotland at Coldstream, before turning south west again on the A698 to drive to Kelso. Then take the A699 to Selkirk before joining the A708 and driving, via Yarrow and St. Mary’s Loch, to Moffat. There you need to take the A74(M) south as far as junction 17, where you can pick up the B7068 which will, eventually, take you back to Longtown and the river Esk. It’s a journey that can be done in daylight on a long summer’s day.

Of course, this route merely encircles ‘our’ Borders. It took Flora a lifetime to get to know it and, despite having visited it for over thirty years, I’ve hardly begun to do that.

The next stage of the process required weaving together Flora’s material: texts from her notebooks, our letters and emails and, importantly, her images. These different elements suggested different threads, literal, metaphorical, and imaginal, for the whole weave; the warp a variety of texts, the weft an array of variegated images.

A little about the images, then. The compound black and white ‘framed’ images reproduce those pasted into Flora’s notebooks. As I understand it, she took photographs from her early teens onwards. Then, when she first became ill, she bought a little portable scanner and started copying images from Lizzy’s collection of Oliver and Aitcheson photograph albums. I assume that the material for her dense compound photo-images came from these sources. By contrast, the many single black and white photographs seem simply to document people and places. Some appear to be experiments in deliberately overlaying images. (Flora was fascinated by images such as the mugshot of an Australian criminal from the nineteen twenties). Some of her images have notes on the back, which I’ve reproduced in quote marks. Otherwise, I have left her images untitled. Most of the colour images, apart from those of both Flora and myself wearing her ‘Laura’ mask,[3] are my own and are included because they evoke places we both knew. The titles of these are mine.

In piecing together Flora’s material, I have taken as central her belief in the links between place, kith and what the Romans called genius locus, the spirit of place. That belief was also tied up with a shared interest in ‘imaginary friends’.

By the age of seven about a third of children have an imaginary friend they experience through all manner of vivid interactions. This friend may take the form of a human, an animal, or some fantastical creature. They are often deeply bound up with children’s relationship to place. These intense friendships are not, however, restricted to childhood. Some creative and socially well- adapted adolescents (and quite possibly adults) keep in touch with imaginary friends. This does not affect their other social interactions and there is no evidence that they are particularly isolated, lonely, or have personal or social problems. These friends may provide comfort in the face of life difficulties or coping with traumatic experiences, but they may also be active partners in creative work. Although once largely seen negatively – as a mark of childishness, extreme introversion, or as a cause for developmental concern – such friends are increasingly accepted as an outlet for a child’s imagination. A prompt for storytelling, games, a source of companionship and for coping with new situations. They may even be a source of parental pride in the quality of a child’s imagination.

Invisible friends are sometimes seen as analogous to characters in novels, about whom authors say: ‘they have a life of their own’, but this seemed doubtful to Flora and me. We thought that the alternative view, that they may be personifications of some aspect of a person who would otherwise remain excluded, voiceless and faceless, made more sense. As such they may ease the demands of living in a complex, multi-dimensional world; helping us to accept and narrate ‘difficult’ relationships necessary to our plural self, enabling us to set out narratives we need for which there would otherwise be no focus.[4]

Flora herself understood invisible friends, and particularly Hamish’s friend ‘Laura’, as an important interface between our everyday sense of our place in the world and our imaginations. They enabled a person to remain imaginatively open in the face of what are too literal, dogmatic, or reductive social conventions defining the limits of what is ‘real’. She believed such friends enabled individuals to have a living engagement with experiences and values outside the limits of those conventions, with a second life that might have deep meaning without necessarily being literally ‘real’ or ‘true’.

I should add that imaginary friends have played an important part in my own life and work. Most obviously in the figure of ‘A.’, my interlocutor in two books: ‘8 Lost Songs’ and the first volume of ‘Debatable Lands’. As Flora observes in the section ‘The respondent’, she had in many respects taken the place of ‘A’. This obviously raises questions about the relationship between invisible friends as existing in a purely imaginary realm and those friends to our imagination central to our imaginal life but peripheral to our day-to-day life. (Flora and I only met face-to-face twice.)

In my exchanges with Flora about imaginary friends I always envisaged them in terms suggested by the theologian Roger Corless. He proposes that we each live, sequentially or simultaneously, in more than one world, argued that we may in consequence have, and so need to articulate, more than one personality. When the conventions that define reality in the world into which we are born do not allow for this multiplicity, we may conjure up invisible friends to help us address this lack. Corless sets out his own thinking about this in what he describes as ‘a true story that never happened’,[5] one in which several people discuss their different spiritual positions. In this way, he allowed different aspects of himself to emerge as semi-autonomous characters acting out a drama on the stage of his imagination. My sense is that, in assembling Flora’s material I have, in some respects, attempted to create a ‘true story that never happened’. 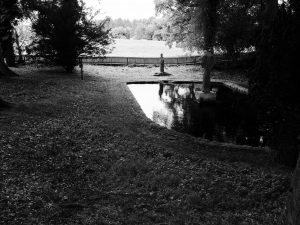 [1]Christopher Whyte 1997 The Warlock of Strathearn London: Indigo p. 203. Whyte’s strange conception of a ‘magical’ world was unknown to me when I began editing Flora’s writing, yet seems to chime with our concerns.

[2] Although the term ‘kith’ is now largely obsolete, in Middle English it meant both ‘familiar country, places that one knows’, and ‘acquaintances, friends’. It has linguistic roots back into Old German that link it to knowledge and to our modern term cunning. Kith is, then, a way of knowing the world that does not distinguish places from friends. The (impossible) task Flora bequeathed me was to ‘map’ something of this.

[3] These photographs were taken by Sharon Townson and are from a project Flora and I had started but were unable to complete because of her illness.

[4] In the final pages of Islanders, Margaret Elphinstone addresses the conflicting understandings of a newly arrived priest on one hand and the local wise woman and midwife on the other. In the process, female characters are reminded that we each have “many stories” and that “they’re all true,” so that there is no point “pretending that there’s only one tale which takes account of everything.” Margaret Elphinstone, Islanders (Edinburgh: Polygon, 1994), p. 408.

[5]Roger Corless, “Many Selves, Many Realities: The Implications of Heteronyms and the Plurality of Worlds Theory for Multiple Religious Belonging,” Pacific Coast Theological Society Journal (2002) http://www.pcts.org/journal/corless2002a/many.selves.html