[This the seventh of forty-nine narrative sections that make up Convergences: Debatable Lands Volume 3, the concluding work of my Debatable Lands deep mapping project. The complete work is now available on request as a pdf. If you would like a copy, please contact me at: iain19biggs@gmail.com]. 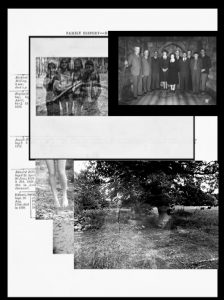 Iain, I kept a copy of all my responses to you from our exchanges about the first ‘Debatable Lands’ book. You’ve probably long since forgotten them, but I think there are a few that still seem pertinent to what I’ve been struggling with in writing this. They are as follows.

1]. You identified A. as a personification of questions about the world in which you earned your living. That identification was obviously central. You also called him a constant companion, which to my mind makes him equivalent to an invisible friend who accompanied you as you moved on from the world you conjured up in ‘Between Carterhaugh and Tamshiel Rig’. But it’s his role as the voice addressing the circumstances of your inability to reconcile your daughter’s long-term illness with the Apollonian attitudes of the medical world and, increasingly, of the academic research world in which you were enmeshed, that seems to me central to what’s been going on right across your work all these years.

This relates, it seems to me, to a powerful point of contact between the two of us. There are I think parallels between the, sometimes tense, role that A. played in your writing and the tensions between my ‘cosmopolitan’ self and the ‘country woman’ self who, sometimes grudgingly, participates in Lizzy’s world as seen by the local community. (There’s another Lizzy who is troubled and fragile and altogether different to the one the community sees). I would need to give more thought to this parallel but wanted to put down as a marker for myself about our relationship.

My provisional view is that A. was an aspect of yourself, a separate, even quasi-independent, entity who has a degree of distance from a situation you sometimes found almost impossible to live with. And I now suspect that I’ve taken on something of that grumpy old bastard’s role.

2]. I think you’re at least partly right about the working people here in the past living in multiple interpenetrating worlds; as interacting with, as I think you wrote, the familiar earth of animals and plants, the celestial world of God’s heaven, the demonic world of Satan, and the preternatural world of the planets and the stars. That although officially God sat spider-like in the center and governed the whole, in practice people lived among a multitude of contending forces located in an uncertain relationship to Divine Law.

Also, that ritual action, prayer, and chant or song might be employed to magically affect the interplay of contending forces. I liked your reminder that magic had different forms: ceremonial or angelic, natural, artificial, or demonic, the first two often blended with spiritual disciplines and prayers indistinguishable from the rituals of popular Catholicism. Of course, (she says!) this was associated primarily with women as practitioners of a magical form of healing, conducted out of motives of neighborliness, paternalism, good housekeeping, Christian charity or simply self-help. I’m sure many villages did have their nurses and wise women well-versed in herb-lore and in secret brews and potions, so that their medicine often blended into white magic and, as you say, sometimes verged on black. I still know people who can assume a certain authority locally based on a (perhaps misplaced) sense of that tradition and all that had once underwrote it. After all, I’ve heard an old man in Ellingham say that it was only when the railway came that the fairies stopped dancing on the Fairy Hill!

Who else but women would take the time to attend to all this, then as now? …

3]. You can imagine my delight at reading what you wrote about women’s lives on the Western Marches between the Twelfth and Sixteenth Centuries. The part of me who revels in the distaff Borders heritage I shared with Kate whooped with delight that in 1327 women on the Western March took part in raiding like some of their Gaelic-speaking sisters in Ireland. How very practical to carry off the shorn wool and linen that the men disregarded! No wonder they were characterized as independent-minded, courageous, absolute mistresses of their own houses, and concerned to dress well by foreign observers in Protestant Edinburgh. I do wonder, however, what the authorities there thought? I suspect they saw them as, at best, badly behaved and, at worst, ‘whores’. I particularly like the Italian ambassador’s comment about they’re being bold and not distinguished for their chastity because they gave their kisses more readily than Italian women gave their hands. That’s perfect for Kate, somehow.

You write that we have no equivalent woman’s penitential testimony to match that of Geordie Burn. But the Kates of our world in their earlier incarnations would surely have matched him, hopefully not in murdering, but quite possibly in drinking, stealing, taking deep revenge for slight offences, and in sexual adventures. I think of them as the Borders contemporaries of the Nurse in ‘Romeo and Juliet’, Margaret in ‘Much Ado about Nothing’ and Audrey in ‘As you Like It’.  Anyway, on a practical level, Geordie Burn never have found about forty men’s wives to fornicate with if there’d been no wives willing to oblige him! So, where are their voices now?

I’m sure that the repertoire of Borders singers in early Stuart times would have consisted of far more than Riding ballads about feuds and raids. You’ve only to think of the diverse repertoire of the early Bluesmen like Robert Johnson, Charley Patton and Peetie Wheatstraw. They all had to earn a living and did it by singing what people wanted to hear.

Furthermore, why would James IV pay the Carlisle girl twenty-eight shillings (which must have been a fortune then) to sing ballads that dignified the very way of life he was campaigning so hard to end? It’s easy to forget that ballad collectors like Scott and Child had their own presuppositions based on class, propriety, and gender. I doubt they were any more tolerant of bawdy than the pious folk who condemned the Blues as the devil’s music and I’m sure their collections represent only a fraction of the songs known to someone like the ‘Carlisle girl’. (I say this knowing something of the repertoire of her modern equivalents, the singers among today’s Scots Travelers.) 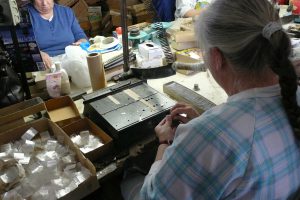 I was very moved by what you wrote about Cecil Sharp and Maud Karpeles meeting with Cis Jones. Lovely that she sang them versions of the old ballads: ‘Long Lankin’, ‘Barbara Allen’, ‘Lord Thomas and Fair Ellender’, ‘Lord Bateman’, ‘The Elfin Knight’, and ‘Little Musgrave and Lady Barnard’. Moving too that she was sometimes accompanied by her two daughters and her granddaughters. Good for Maud for seeing through Sharp’s claim that Cis was of sound English stock and for acknowledging that about one third of Appalachian songs were carried on Scottish and Irish (I’d guess Scots-Irish) melodies! Interesting too that the supposedly English singers were mostly of northern English, Welsh, Scottish, and Irish descent. So that Appalachian song culture, from the early C18th on, must have involved constant cross-cultural exchange between different European migrant groups, Native Americans, Melungeons, and Afro-Americans.

I’m also interested that Cis Jones’ belonging to the Holy Rollers religious sect didn’t stop her singing ballads, given how often they intervened to prevent the collectors from hearing ‘love songs’. I’d give a good deal to know what was in Cis’ mind when she said she was sure Sharp and Karpeles would make no bad use of the ballads. It makes them sound like spells, part of the lore of ‘granny women’ and ‘yarb doctors’. Maybe the other singer Sharp and Karpeles were particularly interested in, Julie Boone, was rarely at home, and wandered all around the country bare-footed staying wherever she happened to be when it was dark, because she was out collecting ‘yarbs’? Anyway, you’ve given me an appetite to discover more about all this and, when I do, I’ll report back.[1]

Re-reading these old thoughts again today made me think about the many different persons that make me up. I’ll come back to this another time.

[1] Flora was true to her word on this and, among other things, obtained an extraordinary set of photographs taken at the Tar Heel Mica Co. Inc., of Plumtree, North Carolina by the ceramicist Elizabeth Turrell, (see colour image above). Flora wrote to me that she’d like to think of the women in them as the granddaughters of people like Cis Jones and Julie Boone, although she doubted they still shared their beliefs.