One thing leads to another…

For this sharing of words, I’d like to talk about living and working in Newport – the South Walien one as opposed to the one with the softer edges of Pembrokeshire.

The Newport I live in is often referred to as ‘a Shit’ole’ , ‘Rough as Fuck’ , and seen as a place you pass through on the train or coach on your way to other places. It lies on the banks of the River Usk, once busy with boats and ships, dating from when the Romans were ‘resident’ at Caerleon to the Industrial Age of coal and steel.

Because of the huge tidal range of the Usk, it has the ability to totally transform the appearance of the city – from a watery reflective ( depending on weather ) state, to a thick mud bath ideal for wading birds. ( someone once described it like “looking down on a mini Atlas Mountains” ).

Years ago, if anyone had said to me –  one day  you’re gonna live in Newport, and what’s more, you’re gonna like it ! . . . I would not have believed them – No fecKin’ way !! I grew up very much with Cardiff and London in my blood, and as I just mentioned, Newport was a place you passed through.

My first encounters with the PorT – as it’s commonly referred to – was in the early “90’s, coming to rehearse with a band I was in at the time called The Terrorist Ballet Dancers from Hell. We would rock up at a house in York Place and spend hours in the Basement getting stoned and playing music. It was here I got to meet a handful of Newport’s creatives – fresh (ish) out of Art College who’s one of many creative outlets was putting on happenings known as UFO nights, usually at TJ’s  night club. The club would be decked out in a plethora of materials and dead foliage which would then be projected on, to create a pretty trippy backdrop for the soundtrack of the evening.

It was through my adventures to the PorT and getting to know a wonderFuLL combination of people that would partly inform the next chapter of my life – meeting Paul Burwell who was one of the founder members of Bow Gamalan.

Paul Burwell was a true maverick – mouthy, stubborn, and a person who got truly excited by noise, and anarchic energy. There was no hierarchy involved in the Gamalan and the very experienced played alongside the less so… it felt like a right of passage, a place where you were allowed to try things out , a testing ground of finding who you might become…

When I started writing this sharing of words, I had no intention of writing about Paul Burwell ; in my minds eye I thought I would quickly skip to the Newport of the Now … but I guess this is a great example, and a way in to getting at the heArT of what I would like to write about – for it seems to be that when you are not looking for the direction in which you are going that you seem to find the direction,

If it had not been for the Ryder Cup being held in Newport back in 2010  I wonder if the Empty Shops Project would have come in to being as quickly as it did. This sounds cynical I know, but…

Around this time I think it is safe to say that there were as many  dying and empty shops as there were shops ‘Open for business’ ( a term later coined by Newport City Council to remind Newport’s inhabitants that despite the outer appearance of the city looking semi-derelict , everything was … ‘Open for Business’ and indeed, ’Open for Pleasure’….

The time leading up to the Ryder Cup became active in the respect of making Newport more aesthetically pleasing to the eye and one of the solutions was to give the empty shop spaces over to artists ( local and beyond ).

The new residents not only gave the city a new breath of life and colour but most crucially became spaces where you could meet other artists and people both interested and curious about art. For many, it became a life line.

It was in one of these shops where I first worked in Newport ( along with my husband / partner, Gareth Clark ). As the performance duo Mr and Mrs Clark, we were asked to ‘activate’ a shop space to host a project called ASSEMBLY initiated by National Theatre Wales. The idea behind the Assembly projects was to gleen information from locals about themselves and where they lived and then to make an evening’s event in which stories and scenarios would be shared.

It was through this experience of very much making it up on the spot that we started to engage with the eclectic mix of people that live and pass through Newport city centre.

I remember the waves of trepidation and fear as ideas that had til that point resided in the head, were now going to be tried out – in the flesh. Our first day of StuFF involved offers of a 30 second portrait ( of which I did many ), a lunchtime installation which was housed in the shop window,  in which Mr Clark was wrapped in bubble wrap, and E. ( entrepreneur and expert in experimenting with narcotic mixes ) sat in a deckchair, and someone else might have been wearing a rubber cows head…. ( if it wasn’t on this occasion, it certainly happened at a later date ). This window of visual stimulation offered a different experience to the usual consumer experience and was the first step in what would be the beginning of many creative acts in the Port.

We got to meet the many artists and people who are creatively minded through putting on events like this, often using a cabaret format where all art forms and creative endeavours were given full license to bang up next to each other.

If the term Outsider Artist/s applies to those outside of the ‘art establishment’, then Newport is rich in Outsider Artists. – This may also explain why it is so difficult to pin down what exactly the ‘art scene’ in Newport is, because it is many things to many people ; it is an independent, many headed animal that seems to fly under the radar, seeking out the gaps and spaces created by others.

The Empty Shop project provided the foothold into further collaborative adventures  both in and out of empty shops, and it was through these experiences that I started to get a true understanding of how arts practise can start impacting on the everyday rhythm of a place. It’s when people start to stop you to ask what are you going to be doing tomorrow ? that you know you have caught their attention, and more importantly, their curiosity !

TOP TIPS for creating art in places that do not have a visible ArT space.

If I had a dog, I would walk it regularly. I don’t have a dog, so I walk my inner dog instead.

Walking through Newport, especially if you follow the river, it is not too difficult to spot its industrial past. Tracks and man made, mud worn docking areas still follow the river down stream, and walls still hold remnants of metal hooks and rings, evidence that the industrial age was very much part of the fabric and making of the then town – now City.

It is a place where things, people and events nudge and bang up to each other. There is a feeling of defiance about the place and an air of independence.

Today, the tide was on the out breath, revealing wave patterns, reed banks and seaweed patches – good fodder for waders. It goes without saying there was the token shopping trolley, a couple of bikes, off cuts of trees…

Stepping off the feeder road, the rhythmic banter of the car auctioneers voice weaves between passing lorries.

At the Transporter Bridge I meet an Irish man on a bike. He has time on his hands ; reason for being in thePorT is due to football – the beautiful game. He’s been here to interview the manager or spokes person at Newport County, who recently beat Leeds Utd. He has an hour before the train back to London and we end up following the River back into town. It is through his questions about the place that I realise what a gateway and Junction Newport is – There are entrances and exits to many geogrphical possibilities here…

Iggy Pop once said, ‘Always know where you Spiritual Exits are…’ , this has always resonated with me and might have an added explanation of my love of the Port… you are never too far from getting out of it…literally.

It is an interesting time to be living in a place like Newport. For so long it has been in the shadow of cities like Cardiff and Bristol, unable to compete with its Big consumer heavyweight neighbours. When the shopping centre was still in its paper form, we did suggest to the council that it may be better to think about creating an alternative centre, one that would house a public square in which veg could be grown, surrounded by smaller, independent traders. Alas, they did not go for it. . .  Quel Surprise !

Marega is a performance based artist living in Newport, South Wales. Originally trained at the London Contemporary Dance School , and later studying Fine Art at Howard gardens ( then UWIC ) in Cardiff, she has worked and played solidly in the grey area that lies in between disciplines since the mid-eighties.

She is one half of the performance duo Mr and Mrs ClarK.

Photo taken outside the old elysium gallery in Swansea. 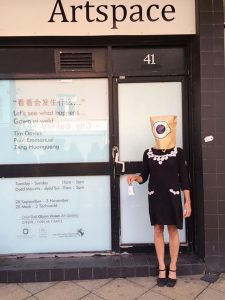